I had a brief email exchange over the weekend with our contributor Eric Baker in which he brought to my attention that our colleagues in the entertainment biz never leave comments on this blog, but rather send them to us in private emails.  Sometimes I might get a “like” or a quick note when I post a link to a PFC piece on Facebook, but that’s still considered private.  “It’s like being in a high school exclusively made up of cool kids,” I explained in my reply to Baker. 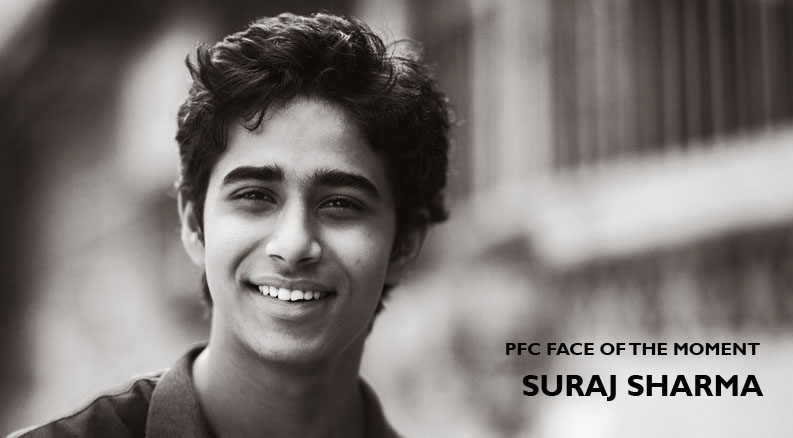 The 17-year-old star of "Life of Pi" is just how I imagined him from the book.

James Tuttle has similar experiences.  For example, in a wee incident last year, he was taken to task by a friend of his, an Oscar-nominated actress, for using the word ‘retarded.’  She protested that he was too intelligent and articulate to need to resort to adjectives that disparaged mentally disabled people; a child of a friend of hers was one such person, etcetera.  Even though I pointed out in a post of my own that the definition and etymology of ‘retarded’ was broad enough to excuse Tuttle’s use of it, the actress’ point was legitimate in light of where we are culturally with the bullying issue.

Above all, her stance was cool: it wasn’t she who was affected by the word, it was the child of a friend; she spoke for the weak of the world from her perch on Mount Olympus.  More the point, she chose to voice her objections in a private communication rather than in the more public comments section of this blog, which in hindsight was probably wise because I would have jumped all over her far more vocally just to use the cool of her celebrity to drive our own numbers up.

In one of the more retarded moves from Republicans we have seen so far this season—and, yes, I am using the word in the sense of ‘delayed, backward’—a desperate smear campaign was unleashed last week deriding President Obama for being too cool.  That’s right: For. Being. Too. Cool.

For those of you who missed the anti-Obama attack ad, here it is, in all of its strange fluorescent disco-graphic glory:

This definitely triggers flashbacks to not just high school, but junior high school, when social interactions start to become something of a blood sport, especially between the boys.  This is purely misdirected resentment that has no real basis in anything that is legitimately hateful about the subject being pilloried.  They are hating on the Prez because he is something they are not and never will be: utterly relaxed and confident in the face of the greatest pressures a human being can experience, and still faster than a speeding fly even in the middle of an interview.

I don’t personally find Obama to be cool, but I have a slightly more esoteric interpretation of the word, perhaps higher standards.  I don’t think he’s any slicker than Reagan or Clinton.  The fly catching was either a happy accident, or a sign of a misspent youth practicing that skill.  The beer chugging, the Twitter quips and the appearances on late-night talk shows just demonstrate that he’s a man of the times, as all presidents must be.  With regard to that, I’m relieved that Joe Biden has finally underscored what Teddy “Bully” Roosevelt really meant by his ‘big stick.’ 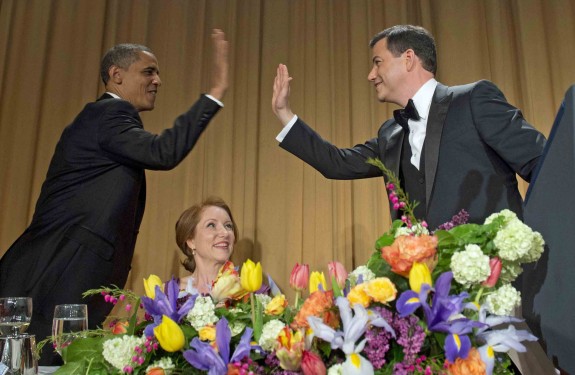 In an almost meta retort to the Too Cool Campaign by showing that he is emphatically not always too cool for school, Obama completely blew it on Friday at the White House Correspondents Dinner—a.k.a. The Nerd’s Ball—by being decidedly unfunny.  But he shouldn’t be expected to be a stand-up comedian as well as leader of the free world.

Obama’s success at last year’s WHCD at the expense of both Donald Trump and Matt Damon was hard to follow up.  As any entertainer can tell you, there is nothing worse than having to come up with something better than a previous smash hit.  And as every writer and performer on Saturday Night Live knows, just because you don’t get a laugh doesn’t mean you haven’t made a point.

At the end of the day, when it comes time to vote many of those resenters will still flip the switch in favor of the man they secretly look up to and aspire to be, just like they did when they elected as prom king and queen those popular kids they dissed so meaninglessly in those peripheral corners of the playground where the uncool lurk. 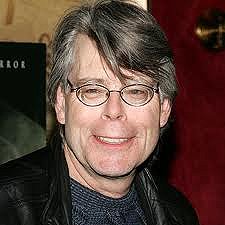 King looks more like one of his creatures every year.

Someone who is just too dorky for me to even finish reading is Stephen King.  His piece in The Daily Beast entitled “Tax Me, for F@%&’s Sake!” reads like a rambling comment left by a lonely, demented reader to any other political editorial written on TDB, host to some of the wackier, unfiltered comments on the Web.  His invective-laced diatribe completely defeats the intent of his message just by its tone.  It is completely unworthy of one of the most successful writers on the planet, evidence that King is, in the words of my friend John Wood the Plumber, “Completely, certifiably insane.”  Here’s an except:

Tough shit for you guys, because I’m not tired of talking about it. I’ve known rich people, and why not, since I’m one of them? The majority would rather douse their dicks with lighter fluid, strike a match, and dance around singing “Disco Inferno” than pay one more cent in taxes to Uncle Sugar.

So what’s cool out there right now?  Ridley Scott is almost over-egging the pudding with a new trailer for Prometheus, as if we weren’t already wetting our pants to see it before anyone else.  It might be the only film in recent memory that will force me to try blackmailing a certain colleague in my corner of the playground to get me into a screening of, if only I could think of something with which to blackmail him.

If there is another movie I’m looking forward to more than Prometheus, it’s Ang Lee’s Life of Pi.  Lee apparently dazzled attendees of last week’s CinemaCon in Las Vegas with three scenes from the film, which were intended to illustrate just how lyrical 3-D can be in the hands of the right filmmaker.  There is still no trailer and only one promo image out there for the film, which as any reader of the book knows can’t be the real deal, either: 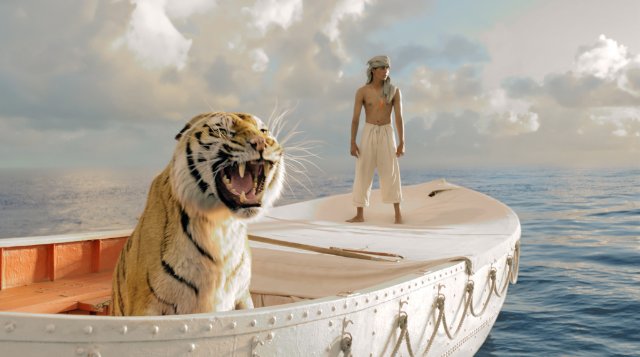 Yes, it’s a tiger in a lifeboat with an Indian boy in a turban, and it is an official image from Twentieth Century Fox, but it’s too pristine, unless this is meant to be an outtake from a fantasy sequence in which all of the orangutan and hyena blood and guts are licked clean from the boat.  It has to be some comped Photoshop image the marketing department patched together just to get something out there to appease the hungry like me.

There is already Oscar buzz about LOP.  I’m not falling for that Photoshopped illusion from the marketing department, either, but I am a huge fan of Lee’s; he has had an amazing career thus far, the only man who has made a gay drama that is both a critical and a box-office hit, so I’m definitely cheering this project on.

One group of teens who were not cool were the Christian students attending the National High School Journalist Conference in Seattle last week, who walked out while gay anti-bullying crusader Dan Savage was trying to make a valid point about the egregiousness of using the Bible to justify homophobia and depriving us of our rights.  Unfortunately, Savage’s reaction was to call the dissenters “pansy-assed,” which instantly made him a bully himself.

In this video, you can see Savage get kicked off balance by the walkout, which sort of forgives his reaction, but not enough to justify it:

With power comes responsibility, and Savage is not only an adult but a cool adult whose area of expertise is the one that causes the most anxiety for teens, and the majority of adults: sex.  He is also the preeminent champion of anti-bullying, the biggest cause célèbre in high schools across the country right now.  A misstep like this can undermine his credibility in one fell sentence.

The worst is his choice of the adjective ‘pansy-assed,’ which reveals that even the most vigilant of LGBT defenders can be a victim of the very stereotypes he seeks to abolish.  He might as well have said the Christian students’ walkout was “the gayest, most retarded move.”  We love you, Dan, but that was, yes, decidedly uncool.

We’re going to have to settle for Stephen King as Schizo of the Week, which only means that the Republicans, Arab dictators and feral Hollywood action stars have been containing themselves recently, a good thing.  The same goes for the trannies and tweakers down by the Gay and Lesbian Youth Center on Santa Monica, which is usually fertile ground for schizo spotting.

I leave you instead with a video picked up by LGBT blogger Joe.My.God showing North Carolina hick Alex Miles shooting up a sign that protests the passing of Amendment 1, which would define marriage as a union between one man and one woman.

Alex might not be aware that a new study out in The Journal of Personal and Social Psychology states we are moving closer to empirical evidence that homophobia is really a manifestation of repressed homosexual desires.  Perhaps if he’d known that, Alex wouldn’t have taped his pansy-assed move and posted in on YouTube for all the world to mock: