The latest random connection came about when I was watching episodes Downton Abbey and Sons of Anarchy back to back, as one must. Two more disparate shows there cannot be, and yet they have similar elements. As an adaptation of Hamlet, you could view the hero of Sons of Anarchy, Jackson Teller, as having similar problems as the Earl of Grantham in terms of managing his patrimony, estate and retainers. But the deepest connection I see is between the Essential Bitches on both shows: the Dowager Countess of Grantham, played by the well-adored Maggie Smith, and the Queen Gertrude character of SoA, Gemma Morrow, played by Katey Sagal, formerly well adored when she was on the sitcom Married… With Children, but now that she is hell in heels she’s likely more feared and despised.

On a recent episode of SoA, the show’s Under Bitch, Tara, called her mother-in-law “a psycho bitch grandmother,” an understatement when it comes to Gemma. The show’s creator, Kurt Sutter (Sagal’s real-life husband), has said that his inspiration comes from the superlative corrupt-cop drama The Shield, on which he was a staff writer. I don’t think SoA comes close to its source of inspiration in terms of dramatic effectiveness; in fact, SoA is beginning to wear me down with its repetitiveness and excessive graphic violence that skips realism too often to keep me engaged, and that happened not for one moment over seven seasons of The Shield. However, I can see how the device of pelting the anti-hero relentlessly with antagonism in the form of family issues as well as external pressures ratchets up the drama — Sutter does seem to take his cue from The Shield there. Jax is constantly juggling the twin bitches in his life — one his own mother, the other the mother of his child — but there is no doubt that Gemma is consistently the bigger threat to his stability. 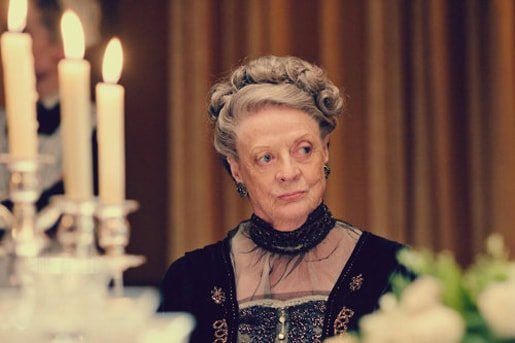 Gemma has no sense of humor, and is not a woman I would tolerate for long in real life. Her tacky styling alone would divert my eyes from her to protect them from such outrageous visual offense. Violet Crawley, on the other hand, is nothing but quips and zingers, even if she also dresses badly. If you look at her lines as written without the punctuation of Maggie Smith’s snickers, without the actress’ signature vaudevillian double-takes, they are outrageously catty, unforgivably nasty. In a recent episode, the laconic, wooden Under Bitch Lady Mary foreshadows her likely role as the future dowager countess by letting a zinger fly at her mother, “Oh, mama, do stop being so transparent. It doesn’t suit you.” Because it’s dour Lady Mary saying it your first reaction is, Ouch! and you hate her a little more than you already do. If the same line had come from Violet, you’d be tittering into your tea.

A shared characteristic among Essential Bitches and Under Bitches alike is they are mothers; it says a all you need to know about show creators/writers and their relationships with their primary affection-givers. I completely sympathize. My own mother is a real-life Violet Crawley, to such an extent my brother Hunt insisted on vetting her rehearsal-dinner speech at his wedding to the nicest gal I’ve ever met in anticipation of a volley of zingers. Still, even censored Mum managed to imply the bride was a bitch from the first line of her speech: “Ever since Hunt was a little boy, he has loved to sleep with dogs…” I could write a hefty book entitled Mum’s Delightfully Nasty Aphorisms. The many times she called me a son of a bitch in my youth, it was almost too obvious if I laughed at the truth of it.

I wrote a rom-com years ago called Mother’s Day, about two friends and their relationships with their mothers. It had decent traction until recently sacked Focus Features prez James Schamus declared it “too much like Wedding Banquet” and it subsequently lost steam faster than a kettle taken off boil. I based one of the mothers on my own, and she was probably the best-loved character in the script. However, after attending a table reading of it Mum said, “That was very nice, dear. But, God, I sound like such a bitch.” She also hates reading about herself in these pages, even if others think she’s a wonderful character, a bona fide Auntie Mame; it can be tricky painting a portrait of people with your subjective, honest impressions because it rarely matches their inner mirror. 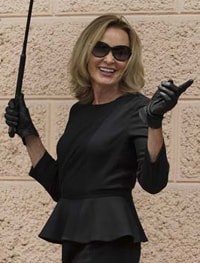 If Mum were a classic WASP alcoholic who didn’t have her own quirky Australo-American accent, if she inflected her speech with her husband’s haut-bourgeois lockjaw, she could be either of the Essential Bitch mother characters that Jessica Walter plays on Arrested Development or the animated Archer. The relationship between the protagonist Sterling Archer and his mother Malory is probably the central conflict of the show in that she is both his boss and the person who fucked up his childhood and turned him into the reckless eternal manchild that he is. Few who know me would argue that “reckless eternal manchild” is one way to describe me — another viral online test pegged my metal age at half my real age. Not a few years, not even ten years. Half my age.

Anna Gunn’s turn as faux Essential Bitch Skyler White on the beloved Breaking Bad caused her some problems off screen. She played the role, for which she won a primetime Emmy, so perfectly that fans of the show began hating her personally. I admit I was repelled enough by the performance that I was hoping she would never be awarded an Emmy for it again. It got to the point where Gunn felt compelled to write an op-ed piece about her ordeal in The New York Times:

My character, to judge from the popularity of Web sites and Facebook pages devoted to hating her, has become a flash point for many people’s feelings about strong, nonsubmissive, ill-treated women. As the hatred of Skyler blurred into loathing for me as a person, I saw glimpses of an anger that, at first, simply bewildered me.

Indeed, the word ‘submissive’ is crucial, and it makes Skyler White really an Under Bitch — there is nothing ‘sub’ about an Essential Bitch.

Cruella de Vil, Maleficent, and Norma Desmond from Sunset Boulevard are the Essential Bitch’s Halloween alter egos. In the Hindu pantheon, she is represented by the black goddess Kali, the aspect of gentle, loving mother Durga when she assumes her husband Shiva’s destructive-creative powers after he is wounded in battle. Transformed by what Gemma on SoA calls “my rape rage,” Kali slaughters everything in sight while giving birth to the cosmos.

Not every mother is an Essential Bitch — most aren’t — but motherhood clearly does bring out the tigress in those who are already susceptible. If I ever wince at the memory of the things Mum has said to me, I just have to watch any given scene in which Violet Crawley takes Lord Grantham down a peg or two. And when Violent dashes from the room as fast as her limp and cane can carry her when her crying infant great-grandchildren are brought down to be coddled… she needed no lines there, just a disgusted wave of her hand. The thing is, her nastiness is by no means gratuitous or inauthentic.

The Essential Bitch is most characters Faye Dunaway has played throughout her career, Mommie Dearest being the apotheosis, of course. I can attest that these roles weren’t a stretch for Faye: She was a central part of my life for about six months when I was in my early twenties — she took an unhealthy shining to me — until her dragon-like behavior torched the relationship for good. Still, I’ll always have a tender spot for Faye — at the bottom of her anger issues was an underlying damaged vulnerability that elicited genuine pathos from me. It’s a characteristic that made her such a brilliant actress, and I use the past tense because her body dysmorphia caused her to damage her face to the point where she couldn’t act properly after the plastic surgery. She turned herself into a malcontent frog. Had she aged naturally, like that other Essential Bitch from American Horror Story, Jessica Lange (literally a mother from hell), she’d also be tearing it up on a superior drama, making the protagonist’s life miserable and keeping us cackling with schadenfreude. (It might help if Faye finally learned to behave on set, too, but she’s too feral.) 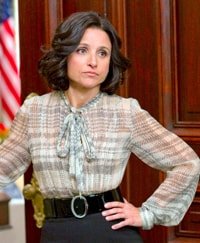 The queen Essential Bitch on the dozen or so shows I follow has to be Julia Louis-Dreyfus as the capricious narcissist Selina Meyer on Veep. Sure, this is great comedy, and Louis-Dreyfus deserved her Emmy for it, but in my experience it’s just a comedic take on a real-life archetype, someone we’ve all met or handled at some time or other. And the hopelessly inept way she treats her daughter — the unintentional cruelty of it — makes me squirm with recognition.

While you count the women in your life or on screen whom you love to hate, let me leave you with a classic Essential Bitch scene, the greatest role in a lengthy repertoire from the most formidable Essential Bitch there ever was, on screen and off, Bette Davis: