I don’t know why I couldn’t bring myself to spell out fuck in the title.  I feel like an old-fashioned wuss.  I’ll never forget what my mum said after I gave an (extremely) drunk toast at my sister’s civil wedding in New York (as opposed to the ten-day one in India), “You said fuck nine times in your speech.  But you’re so intelligent.”  As if saying the word fuck is equated with stupidity.  And this is coming from an Australian woman; I think her own mother taught me the word to begin with when I was five or six.  But Grandma Iris taught me how to say it proper Aussie-like, in a cluster, as in “shit-fuck-piss.”  Slippery slide into American middle class mores, there, mum.  The fact that some friend of the family’s whose name I can never remember still comes up to me at cocktail parties and tells me, ten years later, how that was the best wedding speech ever is irrelevant.  I’m still a foulmouthed dummy.

I will never really know who Brooklyn Decker is because I will never see "Just Go For It," despite the fact that I really like Jennifer Aniston. This new piece of studio boardroom-generated dreck is presumably why Brooklyn has shot to number two on the IMDb Starmeter, just below the demonically inseminated Natalie Portman. Brooklyn is on the right. Apparently she plays the sweet, giddy blonde (formerly incarnated by the prototype sweet, giddy blonde, Goldie Hawn, in a previous version of the film) opposite Jennifer's savvy-sassy modern woman blonde, originally played by Ingrid Bergman, who was never blond despite being Swedish.

Yes, I’m still crapping on about the IMDb Starmeter.  Why, you ask, as you keep one eye on my blog while you prepare to download a movie from Vuze and contribute to the further decline of the movie business? (Go ahead, download.  I’ve got my fiddle ready to play when Bel Air burns.)  Well, one reason is that discussion about the Starmeter, which measures search hits of celebs on the IMDb, sort of segues from the whole intention of this blog to begin with: to increase my visibility online and drive customers to my web design and content shop, Pure Film Creative.  The other related reason is that my experiment worked yesterday: By slanderously, or as my mother might say unintelligently, slapping on that headline about Natalie Portman bearing the devil’s child, hits to my blog soared.  Sorry, Nats (I know people call you that because I used to bang one of your posse from Harvard — damned kinky bugger, I might add), but I work fucking hard on this blog and need readers, even if it’s at your expense.

So Brooklyn Decker is now number two on the Starmeter, which everyone pretends not to care about, and in fact it is kinda boring after the first three days of tinkering with it, but in reality almost everyone really wants to be as popular as possible.  You can graduate us from high school, but never take the high school out of us. 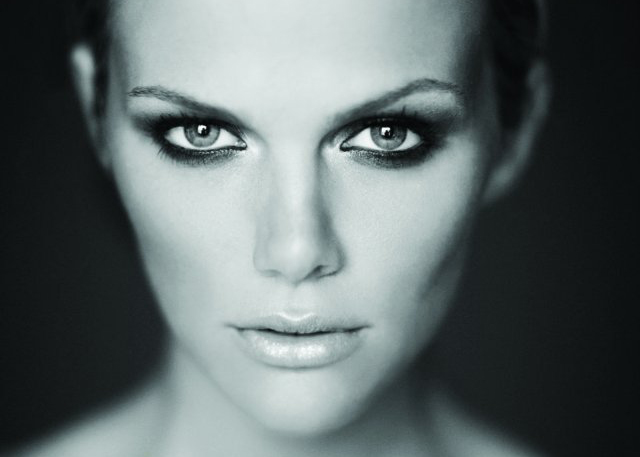 Another pic of Brooklyn Decker I downloaded from the IMDb. I can't seem to find any pix of her breasts, which would bring more hits to my blog. She looks like my former landlady, Linda Hertsgaard, whom I miss so much these days when I'm being persecuted by the execrable Susan Blais.

What do you think happened to make Brooklyn Decker, who doesn’t look like she was ever unpopular, so popular outside of the Sports Illustrated crowd?  Do you think that women ran out of this Adam Sandler/Jennifer Aniston rom com remake of a Walter Matthau/Ingrid Bergman original and dove to their computers and madly looked up Brooklyn Decker on the IMDb, shooting her to number two, sandwiched between two Academy Award nominees for best actress, bride-of-Satan Natalie Portman and Jennifer Lawrence from “Winter’s Bone“?  Or do you think her publicist, listed on the IMDb as Jesse Stowell, had some oompa-loompas in India or somewhere compulsively click on Brooklyn’s name until she reached the stratosphere of Starmeter-dom?  Frankly, the latter prospect sounds exhausting and ludicrous, but you never know.  People really do take this shit seriously.  I mean, look at me, scribbling over a thousand words a night sometimes trying to raise my internet presence, ten years too late.

Okay, I've sort of found a pic of Brooklyn Decker's breasts. Call them demi-breasts. Is that brown re-growth under the "blond" hair? Tsk, tsk, so disappointing.

Speaking of which, do you know what the going rate for an internet article is? One cent a word.  One cent.  To give you an idea of where we are with this, a decent traditional print magazine pays between a buck and two PER WORD.  If you’re famous, more.  That’s one hundred times more, minimum.  Oh Gaddafies of internet content, hear me: if the average web article is 450 words, one cent is less than minimum wage.  The savagery of this iniquity is almost enough to make me regret I didn’t joined the Writer’s Guild before my eligibility ran out (they never told me I only had three years after the release of my one and only feature film to be released in the US to pay the exorbitant joining fee).  I’m sure the Guild will shut down the entire internet at some point to rectify this, ‘cuz that’s the power of film, baby.