SCARLETT’S LETTERS: Dancing in the Garden of Earthly Delights 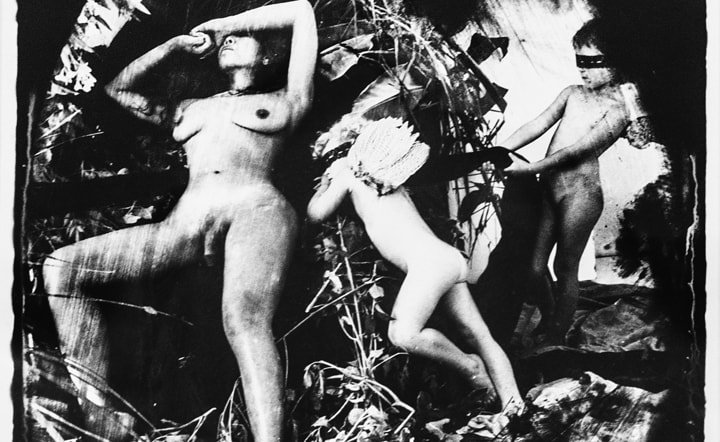 It’s been brought to my attention recently, or maybe I should say I have recently been reminded, why I don’t drink hard alcohol. You might have seen me — unluckily or luckily, depending on what you fancy — a couple fashion weeks ago at the Yoyo Club in Paris. I drank vodka as if it was spring water from Lourdes, then got on the DJ stage and danced a kind of striptease in my pink ruffled silk Rick Owens dress. The security guard gracefully tried to remove me from my adoring audience, but my own grace was finer than his grasp. I got him to join in the dance; as Giovanni told me later, it wasn’t because he wanted to dance. He was acting as my dress, which had magically disappeared.

The Hun’s chauffeur recounted all this to me after I told him how I once more had a few too many cocktails, this time at the Townhouse in Bali, and removed a golden dress and exposed my Lolita tits for a local camera. Needless to say, I was totally blacked out at both happenings and have no recollection of either.

Back in the day, I would black out on tequila at CalArts parties and fervently tell everyone my heart’s deepest secrets — honesty is another form of stripping. One morning I staggered out of my dorm room, going to class on my habitual route, and plucked discarded elements of my property that were scattered in bushes and along the walkways.

Before you think I’m sharing my past shames before an AA meeting, stop. Tuck your judgments away. The truth is getting naked in public or for a camera is neither a rarity nor something I only do in an absent state of consciousness brought on by hard liquor.

My first experience was at age five, posing nude in a Joel-Peter Witkin photograph with another little girl and a well-endowed hermaphrodite. He or she, or however she/he identified, had beautiful breasts and a penis to match. I’m not sure if this is a fact or just a self-created history, but I recall being told I was playing the “dark angel” while the blond little girl was the “light bearer.”

Lately, I’ve posed in the flesh for 032c magazine, Sang Bleu, I-D, and Taschen. This month you can see my bare chest in French Vanity Fair for a tribal portrait of the Rick Owens family. Before the shoot Rick came up to me and said, “I want you to think hardcore artist punk, like L7, and lesbian.” Okay, Step-dad, but can I still like guys? Me and the RO family in Vanity Fair. (ph: A. Dirand – click to enlarge)

There is a distinct pattern here: Why do I appear so frequently without clothing in fashion shoots? It’s a mixture of carefreeness and carelessness at play. I simply don’t have any prudishness or qualms of exposing myself in nature or in heart. What is there really to hide, anyway? Why do we clothe ourselves in shame?

Humans are made of the same ingredients, cast in different molds. We should aspire to the same dream, to belong to the longing of love. We should learn to see each other again as we did when we lived in tribes and communal huts, and hunted naked together, before marriage and property. And, yes, before fashion, when it was enough to have a pelt draped around the shoulders and a loincloth to keep the bugs off your junk.

Like a tribal, I was raised with a lack of boundaries. It took me a long time to figure out where to draw my lines; I’m probably still searching. It may take a while longer: as long as you don’t harm anyone, boundaries don’t make much sense.

In a way, this has also been a blessing in disguise, as one of my ex-boyfriends would say. Disrespectful innuendoes just fly right over my head; I don’t even notice them. As far as I am concerned, who is being disrespected more, the supposed victim — me — or the sad owner of the mouth who is dishing it out? The ex in question came from a reverenced Moroccan family where respect was a central pillar, a hoarded currency; the value of respect was literally beaten into him.

Meanwhile, at age seven, my parents quietly divorced. The relationship had run its course. I can’t recall one scene when they fought or raised their voices in front of me. Respect and shame are egotism, and my parents are far too fully self-expressed to be egotistical.

My oddball family can pride themselves for not having any kind of boundaries. The Hun welcomes all strays, encourages my wildness, baiting me to go to extremes. My dad, Richard Newton, or Richard E. Wachtler, or Ric Marin — who he is exactly refuses to be known — may be from another planet. He rejoices in seeing how far he can push buttons while making himself completely vulnerable in the process.

I still want to question if I have an exhibitionist bug infecting me. In my L.A. tribe, in that lush desert where I was raised, women constantly bathed their pores in a worshiped sun. (We are all sunflowers in L.A., instinctively turning our faces to the light, to the warmth.) It could be because my father has always made primal films where sex is portrayed as just another series of movements, a pas de deux, trois, quatre with a happy finish.

I never learned that middle-class sense of shame, never traded in that dark currency of respect. What others see as “sexualized” is just normal for me

Perhaps the difference between me and the common sexy girls who splatter their pussies wherever we look is I never seem sexy in my images. Like Rick said, I’m a hardcore artist punk. I may not be lesbian, but goddammit I am positively a feminist in how I portray myself, how I allow myself to be portrayed. Boys, I may love your dick, but don’t fuck with this chick.

I am not too eager to get back on the hard liquor anytime soon, not because I’m ashamed of my drunkenness and my exhibitionism, not because I fear being respectless; I don’t need anyone’s forgiveness. It’s because blackouts are not even as fun as sleeping; there aren’t even dreams to remember. I want to be able to recall the good times. Happiness is a treasure to be guarded safely and shared openly. But how can it have value if there is no memory?

I am happiest dancing on a middle ground between intoxication and awareness, when a shameless free spirit is unleashed. Luckily, the demons hidden within the shadows of my unconscious are fun loving. With the Hun for Sang Bleu. (ph: Yi Zhou)