Knowing Alan as I do, he probably means sickness as in the recent colloquialism “That is so sick,” like it’s a really good thing.  In the video up on the site right now, Zoe Kravitz is obsessed with a green dragon plushie costume, with how it makes her feel empowered.  This isn’t my particular experience of people obsessed with plushie.  The plushophiles I’ve met are rather lovable, extreme introverts who like to dress up as cartoon characters and have kinky sex.

Never one to be terribly quick on the uptake, I needed time to think about Tom Ford’s “five easy lessons in how to be a modern gentleman” from Another Magazine, which went surprising viral, namely because of the silliness of the fifth lesson about flip-flops and shorts in the city.  Ford is described in Another as a “fashion powerhouse, film mogul and old school romantic.”  I have decided that the second descriptor, “film mogul,” is tongue-in-cheek, although knowing the fashion press as well as I do, whoever wrote that is either sucking up to Ford or actually believes that because Ford’s one and only film was so well styled and shot it has somehow propelled the designer to the top of the film business.

Too close to home: Colin Firth looks into the blue eyes of a dirty blonde half his age in "A Single Man." I wouldn't date a kid in a pink angora sweater, though. A lime-green hoodie, yes.

I was pleasantly surprised by A Single Man.  No, pleasantly is too mild and a cliché.  I was staggered by how good it was.  Everyone in the Biz had been following Ford’s misadventures trying to get it made with not a small amount of schadenfreude.  How dareth the designing fagelah wander into our rarified climes?

I know both the film business and the fashion world intimately, and there is no question as to which is the more difficult to succeed in.  Fashion people are continuously astounded at how long it takes to make a feature film: nine years on average, no matter who you are.  Even the humblest designer working in some storefront in Williamsburg would have churned out at least eighteen collections by then.  What needs to be taken into account is production on one entire collection costs less than a single day’s shoot on an indie feature film.

Matt Damon and Emily Blunt think they are about to meet God and are appropriately slack-jawed at the prospect, as I would be. Actually, I'd be snickering while pretending to go along with the prank.

I take movies way too seriously.  I don’t mean the business of filmmaking, that’s too much of a surreal farce, like a performance of Ubu Roi in a never-ending loop with Harvey Weinstein, Scott Rudin and Steven Spielberg alternating in the role of Père Ubu.  I mean the movies themselves.  I’m constantly relating real life to cinematic reality, a sure sign of not-so-latent mental illness.  For instance, I might be in an animated conversation about my landlady, the Wicked Blais, gesticulating like a Roman trying to wiggle out of blame for a traffic accident, and I’ll say something like, “I’m just like Burt Reynolds in that scene in Deliverance when he’s down, his leg is broken, bone jutting out, and the rabid hillbillies are coming after him and he picks up his crossbow and …”  All of this is to say that while I know Matt Damon is only engaged in an extended game of adult Let’s Pretend when he makes a movie, I’m a bit concerned about two of his recent choices, The Adjustment Bureau and Hereafter.

I really loved the first twenty minutes of TAB. And I mean that: I more than enjoyed it, I loved it. I was smiling. I thought, Hmmm, this might shape up to be the intellectual challenge that Inception wasn’t.  Then they brought God into it, and I started fiddling with my Blackberry, itching for a game of poker. (I am way down right now, over a million dollars at the World Series tables, but that’s nothing compared to the fiasco a month ago when the damned thing reset and I lost thirty-one million in a nanosecond.)

Let me jump off the rails a second to talk about Inception.  I was expecting too much from a major summer release, I think.  My expectations were raised even more when I had a brief scene with a showcase Cali couple just outside the Arclight Cinerama Dome in Hollywood.

“Are you going to chain your bike right there?” the She of the couple asked.

“Uh, yes, that’s right,” I replied, resisting a retort like, No, I’m just practicing public displays of light bondage with my buddy Schwinn, here.  You know these Germans, so kinky. 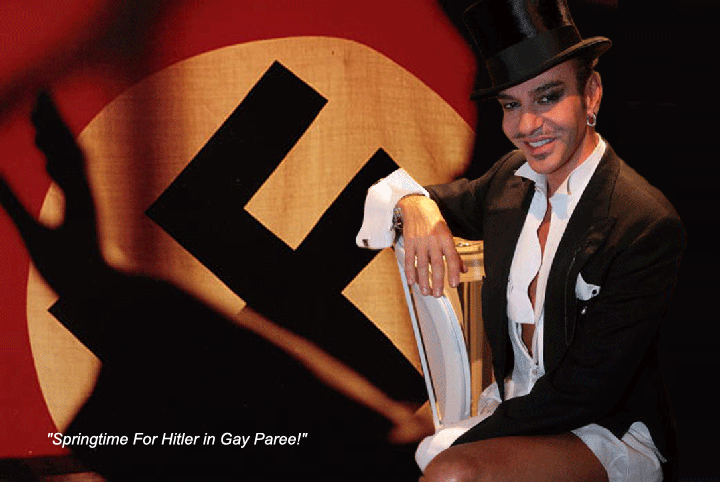 Killough remembers the time he caused John Galliano to be spanked.

Seeing that I will never work with John Galliano, there’s no point in waiting until we get my play Hatter up and going in London later this year to tell my story about how I caused him to be spanked.

For those of you just catching up with this blog, Hatter the play is based on a screenplay of mine, about which one of Galliano’s own people, who I imagine is no longer one of his people, once said, “is the only script ever written that is truly about the fashion business.”

Shut Up! Fuck Off! You're Lying!

And so we continue with the shamelessly extroverted post titles. It's Oscar day.  Ho hum for most of us, nauseatingly exciting for those up for awards.  Literally nauseating: I would be puking in a bucket right now if I were nominated.  With the helicopters whirling overhead because the Kodak Theater is...

I will admit it, I have become something of a dashboard junkie, as they say on Wordpress.com, home to close to 700,000 blogs, most of which are more popular than mine.  Well, maybe I'm not a complete junkie.  Making that claim would diminish the pain and suffering of those who...