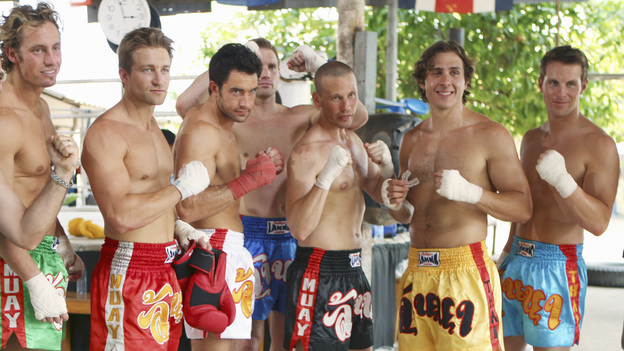 It's amazing that Snooki even has time to wipe off the spray tan, appearing as she does in two reality shows at once.

So, here’s what went down:  Bachelorette Ashley, who is like a squeaky, not-orange Snooki, gets to pick who she wants to be her “one-on-one date” out of room full of good looking, square jawed blond guys and she chooses the guy who looks like a grown up version of Mowgli from Jungle Book.  Whatever.  I guess we all have our type.  They spend the day doing touristy things and making silly, flirty jokes for the camera but he can’t kiss her when the time comes because they happen to be an alleged “very sacred spot.”  Later, they have dinner in the center of a flower filled courtyard surrounded by traditional Thai fire dancers and when they do kiss, it’s like a Bollywood movie exploded up in there.

Back at the hotel, the men who will be going on the “group date” with Ashley are announced, leaving two guys for the “two-on-one” date from which only one will return.  This is so complicated, like, math and stuff!  Well, it turns out that the group date isn’t really a date but, instead, a famous Muay Thai training camp where they are put through a rigorous three-hour boot camp, revealing that the “group date” group is damn fit.  They are then given brightly colored boxing shorts and matching padded helmets and put on a short bus to a public boxing ring in the middle of town where they have to duke it out in the presence of Ms. Bachelorette and a hundred or so townsfolk. 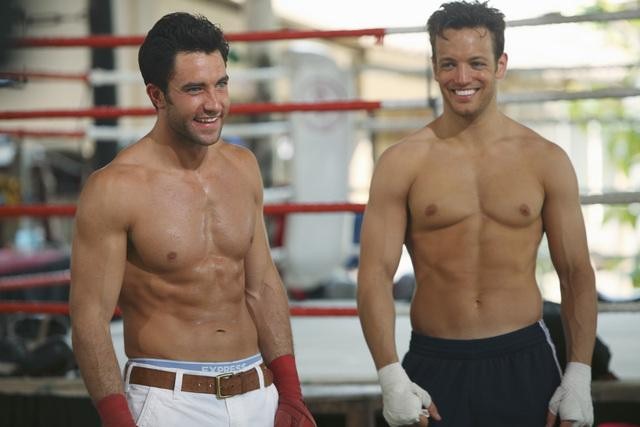 Oh, just get a room, already.

The first two guys begin fighting in a very serious way and Ashley says, “I’m starting to think this might be kind of dangerous.”  Duh.  The dark, hunky Mickey gets his ass kicked by J.P. in the second round and, in the third, sweet and innocent Ames is punched so hard in the head that he sits, glassy eyed and despondently watching the fourth round until an ambulance takes his ass away

After the gay pool party explosion of last week and now this boxing stuff, I really wanted to touch upon some aspect of the women’s fashion world, but Men’s Fashion Week in Milan is upon us and can’t really be ignored.  Before we’ve had a chance to discuss what to wear this coming autumn or even pull all the damn price tags off the things we picked up for summer, it’s time to talk about Spring 2012.  This business is schizophrenic like that.  Maybe that’s why so many fashion people are so fucking crazy.

At first glance, there were a lot of wearable looks coming down the Milanese runways this year.  Grays and pale orange were some major influences and it seems like everyone had at least a few all white ensembles, though those aren’t exactly the “wearable looks” I was referring to, unless you live in Monaco or are planning one of those parties where everyone has to wear all white.  By the way, don’t do that.  At the end, things went off the rails with a silly, self-referential Versace collection but the beginning was promising and I even noticed that my favorite new man-model Clement Chabernaud was making a big splash on the catwalks this season, seemingly replacing James Smith as the go-to guy to open and close the big shows. 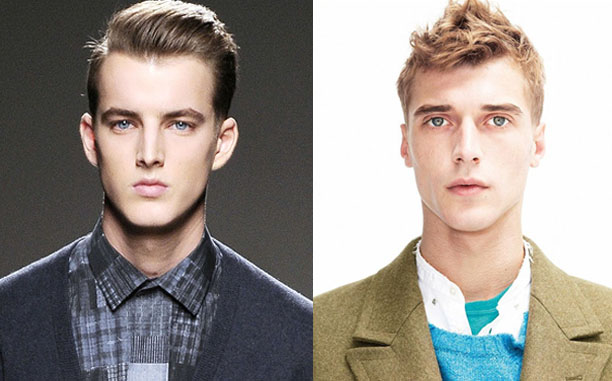 Life imitates art: male models James Smith and Clement Chabernaud seem to be having a "walk off" runway competition straight out of "Zoolander."

Saturday’s Dolce & Gabbana show, which is often one of my favorite and usually very theatrical, was quite tame this season.  There were shrunken jackets, trousers rolled up at the bottom and lots of a basket weave-themed treatment in jackets, shirts, shorts and trousers.  Also on Saturday, Burberry Prorsum may have shown some of the freshest looks so far this season but those stupid reggae hats really killed it for me.  Maybe I’m missing out on something but I just couldn’t get past those or the wide brimmed ones at Ferragamo.

And you thought bad hats were just for royal weddings.

Sunday’s Missoni collection went a little bit too Cosby Show in the knitwear but I loved the fresh mango and turquoise colors and, after all, you just know every piece is going to be beautifully made.  Also Sunday, Bottega Veneta showed some gorgeously edgy leather looks along with their more classic fare.  The Prada show that day, on the other hand, was all over the place with golf wear meets kitschy Nashville Western with some Miami-inspired prints thrown in.  It looked like it sounds, unfortunately. 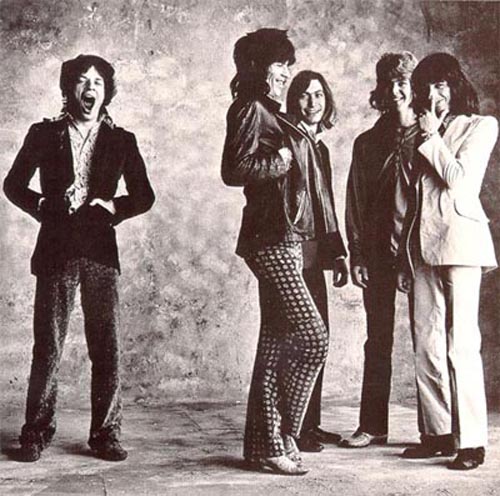 ... and then they stopped picking their noses and yawning and lived happily ever after.

The Alexander McQueen show on Monday was “inspired by British Rock.”  The whole thing looked oddly familiar and then I remembered where I’d seen it all before.  Oh, yeah, on the damn Rolling Stones!  It’s a bit too “on the nose,” as we say in the theatre.  Aside from the clown outfits that they like to trot out every season, Etro was filled with beautiful pieces in exquisite fabrics but even those were styled in ensembles that were simply trop.  If you pulled them apart, you’d have some terrific paisley silk pajama bottoms, great shirts and some slightly longer slim blazers.  Only wear them as they were shown if you’re skinny, high and attempting to recreate a Marrakesh Express kind of experience.

I very much liked Frida Giannini’s collection for Gucci, also shown Monday.  Tom Ford’s Gucci was a staple for me in the 90s but Tom and I drifted apart as the collections became a mix of the theatrical and the mundane whilst I dress somewhere in the middle.  I’m pleased to say that after a few stops and starts, Ms. Gianinni has finally got it right with a near perfect balance of chic and casual.  The trousers were skinny, the blazers classic and there was enough insouciance tossed in to make it all seem like a fun party with really beautifully dressed hot guys. 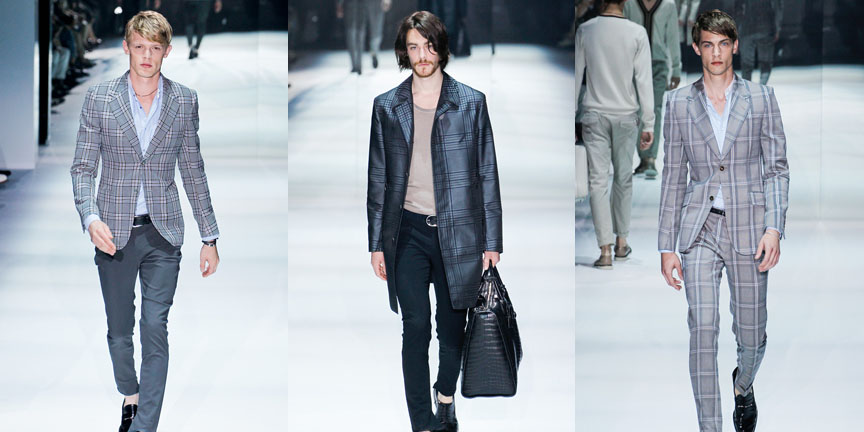 Gucci: back to perfect.

I don’t think I’ve ever mentioned, for benefit of those not often on the Drive, that La Ford had the nerve to open his Beverly Hills flagship directly across from the Gucci boutique, stealing their general manager in the process?  Quelle scandale, right?  Well, not really but I must say, I’m not a huge fan of the glitzy shop and it’s ridiculous price tags.  The day that I pay $850 for a tiny pair of square-cut swim trunks is…well, who the hell am I kidding?  It’s going to be the day I buy some really expensive swim trunks.  They’re so adorable! 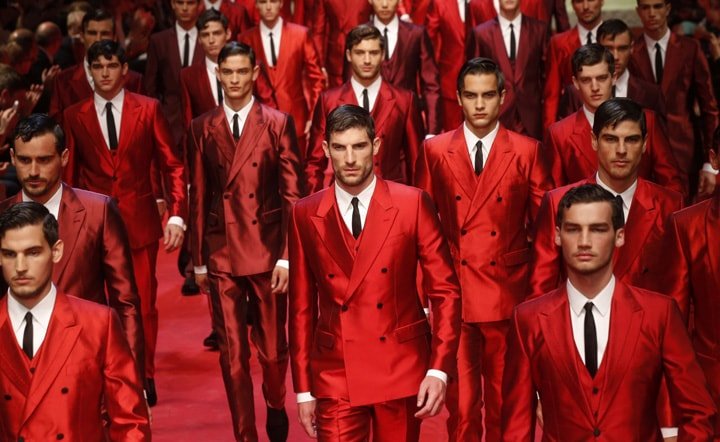