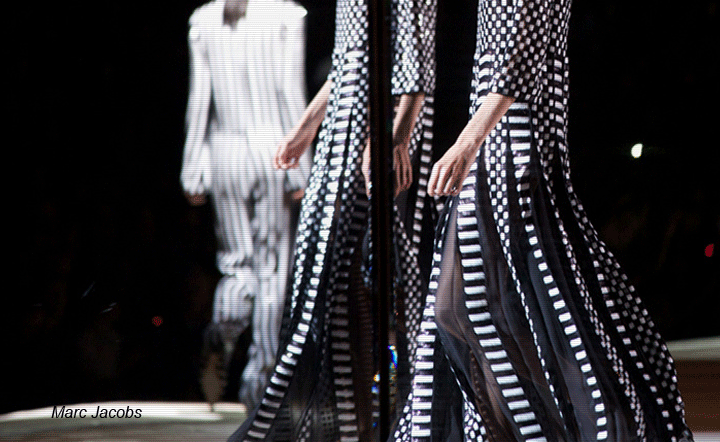 I’ve been trying to be less dismissive of New York Fashion Week lately.  Really, I have.  I love New York City and I know that many people there work so very hard to put on all these shows.  It’s also an election year so I feel like I should just generally be more patriotic, but it always seems like the truly directional designers always show in Milan and Paris.  Like, if Mrs. Prada shows drop-waist dresses one season, guess what kind of waists everyone is going to show the next.  But, no matter what the waist, she ain’t showing them at Lincoln Center.  And did you ever see a full-size fucking train loaded with models and Louis Vuitton luggage pull into a tent in Bryant Park?  Yeah, I didn’t think so.

New York always seemed like the place where D.J.-turned-designers and reality TV stylists-turned-designers were more likely to find a place on the roster, and prior to this season I’d never even heard of the other two-thirds of the people that were scraping together a million bucks to send their shit down a runway.  Imagine my surprise, then, when I consulted the schedule of this year’s Mercedes Benz Fashion Week and saw some names that I not only recognized but also couldn’t wait to see what they’d come up with.  The Rodarte girls and my old boss Tommy Hilfiger brought their collections back from Europe and the Pierre Balmain line was going to show here, too.  I’m not sure what caused the westward migration but I’m thankful the only bright spot of my week wasn’t just the glittery drag catwalk that is The Blonds. First off, there was a big color trend of black and white in the New York shows.  Prabal Gurung took this quite literally, and opened his show with a black outfit followed by a white outfit, then a black one, then a white one and so on.  You’ll see it interpreted in lots of other ways, though.  New York’s fashion favorite Alexander Wang, for instance, used the combo in his garments that were inspired by clothes pulled apart and pieced back together.  I’m thinking he should stick to those fabulous T-shirts he used to do.  Stripes were another overarching theme, again interpreted in a myriad of ways from bold nautical ones to the pale railroad stripes at Rag & Bone, Ruffian and Altuzarra.  We’ll also see lots of floral prints but, like, duh, it’s the spring collections.  There was some totally weird stuff (Rodarte), and there were many absolutely wearable collections, but a few really stood out for me in a good way.

Tommy Hilfiger showed two stellar collections.  His women’s was nautical to the nth degree with stripes of every variety in his signature colors of red, white and blue.  The feeling was spirited and very American, but also quite chic and beautiful.  His menswear shared the striped and nautical allusions but in a crisp, Ivy League way with a nod here and there to the 70s-era denim that got him started in the business.  I’ve also never seen shorts and jackets look like a more natural combination than here.

Stripes were also the order of the day at Marc Jacobs, where the clothes were sharp, clean and quite lovely.  The Mod 60s feel with the go-go girl styling were such a huge departure from the crazy Victorian witches of fall that it’s hard to believe it all came from the same designer.  On the other hand, he was actually wearing pants when he came out to take his bow so something has definitely shifted there.

Eveningwear was pretty much the order of the day at UK-based Jenny Packham, but it was so sleek and pretty in pale pastels and lemon yellow that I thought I’d mention it.  There was nothing groundbreaking but draped necklines and twisted fabric details complimented the 30s Art Deco lines and the beadwork was superb wherever it was used.  Unfortunately, those clunky platforms with the tacky red soles were so distracting that I’m hoping I don’t come across any ladies in Louboutins until I get over the disappointment. You always know that with Thom Browne you’re going to be in for some weird ass shit but he also created some things of amazing beauty this season.  The show opened with some great large-scale gray plaid pieces that were sculptural but wearable and the rainbow tartan separates that followed could be wonderful if you break them up, especially a jacket and pant of green and blue plaid that looked crazy in the show but could be such wardrobe staples.

My favorite show, though, was Jason Wu who channeled Helmut Newton’s photography into a full collection.  It was sexy and a little kinky but never trashy and that’s not an easy balance to achieve.  Girls with sleek chignons and red lipstick walked the expansive white tile runway in black leather, lace, exposed satin bustiers and high-waisted short shorts while enormous mirrors reflected the entire scene.  Nude, hot pink and deep blue ensembles added some depth and the gowns that closed the show are among the best uses of tulle I’ve seen in ages.  Now that, ladies and gentlemen, is fashion.