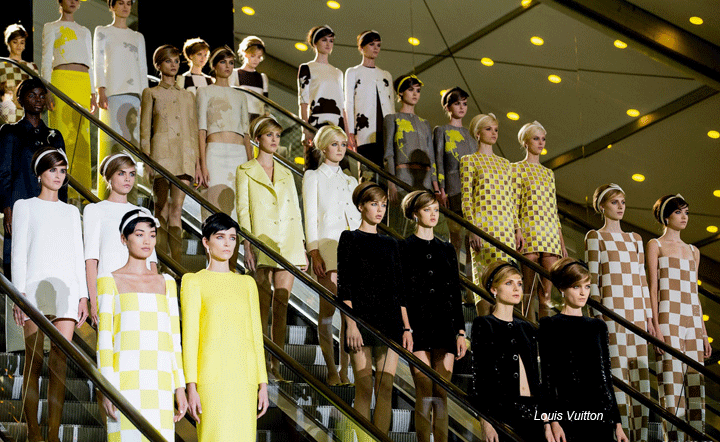 Given how influential the HBO series Sex and the City was in spreading the fashion gospel to the masses for a decade, I couldn’t really pass up watching a few minutes of the prequel series The Carrie Diaries when I flipped on the TV yesterday.  A few minutes were all I could really take, though.  I know it’s supposed to be set in the Eighties but that’s no excuse for the terrible hair, mostly on the men, and the terrible expositional dialogue, mostly from everyone.  Luckily, it was only a quick click over to a re-run of last week’s RuPaul’s Drag Race where the wigs were better and I could learn things about the characters without having them spelled out for me.  Did you know, for instance, that in Texas guys who chase after drag queens are called “clown fuckers”?  Interesting. Now that we’ve got that out of the way, let’s talk about fashion for real.  A few weeks ago, we covered some of the more feminine trends of Spring 2013—the sheer lightness of Ann Demeulemeester, the ladylike lace at Valentino, the cutouts at Cavalli and the big ruffles at Gucci and Givenchy.  There’s also a bolder side to spring that was exemplified by a couple of standout shows, Marc Jacobs in New York and Louis Vuitton at the end of Paris Fashion Week.  Jacobs oversees both collections so it makes sense that would be some similarities and this season’s big stripes were no exception.  Metallic bold stripes were also a statement at Jonathan Saunders and at Dolce and Gabbana they came with dash of vintage seaside whimsy.  The stripes were luxe at Raf’s Christian Dior and in your face at Moschino but, no matter what the twist, they were everywhere.

A few designers looked to Asia and, more specifically, to Japan for inspiration this season.  The Prada show leaps to mind with its stick-on flowers and the weird toe-thong-sock-clogs that I’m really hoping no one wears.  I mean, really.  Don’t wear them.  Dries Van Noten and Etro did some fun variations on kimono shapes, too.  I don’t know if you could call it Asian, but the slouchy shapes and loose pants are going to make a lot of women happy this season.  Check out Céline for the most successful. It seems silly to say the black and white is big for spring because it’s big every year, but I’m saying it anyway.  Checkerboard tile floors heavily influenced the elaborate Balmain collection and Alexander Wang showed almost nothing but black, white or combinations of the two.  Of course, the showstoppers at Marc Jacobs and Louis Vuitton had a lot to do with black and white graphic patterns and everyone else from Michael Kors to Ralph Lauren was in on the action, too.

Bright colors will abound this season, too.  Pay special attention to canary yellow that you’ll find in the Damier pattern that opened the Vuitton show, or came head-to-toe at Kors and in the prettiest of Jenny Packham’s dresses.  Cobalt blue and hot pink are other key players.

It may feel like fashion is going to be all over the place for the next several months, but don’t panic.  Let’s just sift through our options, do what we can to look fabulous and to hell with everything else.