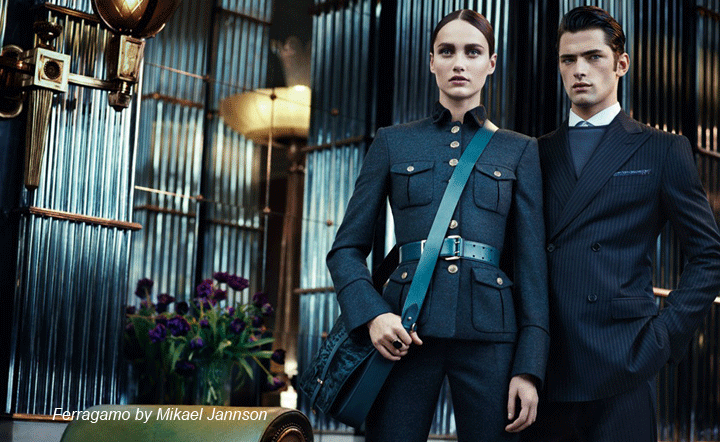 The show would more interesting if they gave the hunky Navy SEALS, Green Berets and Marines trainers a little more screen time.  Between blond Grady “Thor” Powell, smart and pretty Brent Gleeson, tattooed muscle-head Andrew McLaren and Talon Smith, who has an awesome name and looks like a Latino telenovela star, there’s a fantasy type for everyone.  If they wanted to make it really interesting, the guys wouldn’t be wearing so much.

All this obviously started me thinking about the strong military influence in women’s fashion that continues into this fall’s collections.  Military-inspired women’s wear doesn’t seem so strange after so many seasons of it, but when you really think about it, it’s a rather odd idea.  The “military” from which designers are drawing isn’t Desert Storm camouflage, after all, or even “Rosie the Riveter” from the Forties, but rather the epaulettes and gold buttons on uniforms of the eighteenth and nineteenth centuries, long before women had any place in the military.  Maybe we can attribute it all to Marlene Dietrich’s costumes in 1934’s surreal The Scarlet Empress as the young Catherine the Great suits up to overthrow her husband, the half-witted Czar.  Stranger things have happened in fashion, like when about twenty-seven other designers randomly happened upon Dietrich’s Shanghai Express (1932) as inspiration for this season’s Chinese Art Deco looks.  Maybe we should all just dress like characters from Marlene Dietrich movies and call it a day. If you don’t have Netflix or, like my boyfriend, you won’t watch black and white movies because you think “they’re depressing,” I should point out that some key elements of the military look this season are olive hues, high collars, gold buttons and epaulettes.  Designers taking various cues from the battlefields and parade grounds of yore include Jason Wu, Tommy Hilfiger, Altuzarra and Victoria Beckham but Gucci did it in black as a moody soldier-poet might and McQ for Alexander McQueen takes the cake for the most dramatic interpretation.

Massimiliano Giornetti’s collection for Salvatore Ferragamo, though, is military chic done exactly right.  The Ferragamo show opened with a double-breasted black leather and sheared astrakhan military coat and continued through many romantic incarnations of the strong jacket in browns, olives and even dreamy blue-grey.  Trousers were tucked into boots, slim pencil skirts feminized the mix and there was even embroidery on one skirt that softened up an otherwise stern wool suit that wouldn’t have looked out of place during World War II.  My favorite idea was a stiff military coat draped over a lovely silk paisley dress that demonstrated how military-inspired pieces are best broken up into more unpredictable ensembles.

If a picture is worth a thousand words, the following slide show should be worth, well, a whole lot of words.  Check it out!