Fashion Over 50: Two Dames Who Got It Right 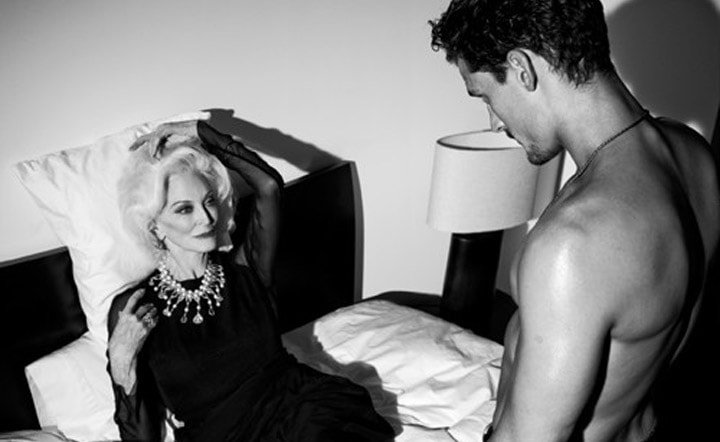 Last week in Los Angeles was a lesson in extremes for me.  On Sunday, after back-to-back champagne brunches, Scott and I dragged ourselves over to the closing festivities of MJ’s, the gay dance bar in Silver Lake, because we thought we’d regret not being there that last day to say farewell.  As it turned out, there was no one there we knew or would even want to talk to, really.  I mean, even the go-go boy was chubby.  But the next night, I was sitting at the best table in the lovely and rather exclusive Tower Bar being treated to great wines and perfectly prepared scallops in truffle oil.  Weird, right?

It’s a bit like that in fashion these days, as well.  On Wednesday people snap things up without even looking at the price tags and then, come Thursday, it’s crickets.  And Saint Laurent on Rodeo can be overrun with spend-y Chinese kids while stately Brioni, two doors down the Drive, sits deserted all day.  Things like this have made me rather philosophical about the business lately, which is odd because it’s, like, just clothes and stuff but I can’t help thinking we can be doing something beyond having a really awesome corporate Instagram account, which my company does not.  Like, really, does not.

But I’m not certain it matters anyway.  Most of the Instagram generation can’t afford a $20,000 bag unless they’re a pop star or one of those Formula One heiresses, and that adds up to about eight people, which started me thinking of the underserved population of women who can really afford luxury goods who, though designers may fantasize otherwise. They are not typically twenty-two.

Let me give you a couple of examples of women who are d’un certain âge and are unquestionably fabulous.  And, listen, I think Iris Apfel is great but if I see one more article about “Style for Seniors” featuring a picture of her in those big owl-eyed glasses, I’m going to track her down and stomp on those fucking things. If you’re a regular Pure Film Creative reader, you’ve no doubt read Scarlett Rouge’s spellbinding profile and interview with her mother Michele Lamy, who is also wife and muse to one of our favorite designers, Rick Owens.  My own experience of Michele was during the legendary years of Les Deux Cafés off Hollywood Boulevard where she cultivated the perfect balance of grit and glamour in an old Craftsman bungalow that she had hauled in to sit hidden behind a fence in a nondescript parking lot. Aside from her gravelly voice and thick French accent, she could be identified by so many layers of fluid dark cloth that it was sometimes difficult to tell where one left off and one began and that often culminated in a dramatic train.  Her hennaed hair was usually wrapped up in another cloth and I seem to remember lots of bangle bracelets, too, but that might just be projecting.  I remember for certain that she was always very kind to me and made me feel part of the Les Deux coterie in the days when I was trying to figure out where the hell I belonged. I’ll always be grateful for that. In recent years and with no thought to age, she has continued pushing the fashion envelope further with her metal teeth and tattooed fingers, and is now doing music and jewelry and I don’t know what else.

Another very artistic lady who doesn’t fall in the fashion industry’s target demographic is my own mom-in-law, Stacie Khouri, an absolute force of nature who just celebrated her seventy-second birthday a few days ago.  Where Michele trades in shades of black, Stacie goes for all-out color.  Her cathedral-ceilinged living room in Palm Springs is painted bright orange over a sea of deep green carpet. Her wildly creative mosaics adorn the fireplace, the expansive kitchen backsplash and several other areas around the house.  It’s a lot of busy but she does it well.

Stacie doesn’t own a single ‘It Bag’, preferring the colorful, heavily beaded clutches that hang as art on her walls when she’s not carrying them.  When she walks into a room, heads turns because she is such a breath of fresh air in turquoise or orange or purple, and no one gives a shit she’s not slinging a Birkin.  And, though I’ve never asked what labels she wears, I don’t think they’re the ones who get the inside front cover of Vogue, as she wisely invests in jewelry instead of clothes.  I once mentioned how much I’d spent on a pair of Gucci swim trunks and she was visibly stunned.  And then I think she yelled at me.  She’s Greek, if I failed to mention that, and her infectious laugh can be felt through a couple of zip codes. Stacie with a fan.

As well as being older than the kids dying for (insert pop star name here) in the front row of (insert runway show here), these ladies also share a magnificent sense of self that elevates them from worrying about what everyone else is wearing.  It comes with age and should be worn as a badge of honor.  They’re also smart about what looks good on them, regardless of the label sewn on the inside, even though what suits each is drastically different.  The day Scott’s mom gets gold teeth is the day we take her on a visit to the psych ward.  Conversely, I doubt Michele will ever be caught in bright blue sandals that match her glasses, but they are both true to their own aesthetic and ultimately triumphant when they step out into public.

Of course, these are only two examples of women who continue to look great as the years advance.  I’m sure you know a few, too.

Heaven Is in the Accessories: Valas Los Angeles