Allow me to apologize in advance.

You see, I’d already had quite a day.  For some reason, I took a hike in the Hills even though I was already dying from leg day at the gym.  Then my spray tan was accidentally set at level two.  I always use the lowest setting for completely natural looking color and never get clocked so this was potentially disastrous.

Then, after an hour of negotiating a steamy L.A. while trying not to sweat—because, of course, perspiration is the enemy of the faux tan—my favorite bartender Kevin made me a couple of strong margaritas at St. Felix Hollywood as I navigated the dearth of images streaming in from the Paris shows.  So you’ll understand that when I finally plopped down in front of the television Sunday evening, tired and a little fuzzyheaded, VH1’s Tough Love: Miami seemed like a really good idea at the time.

First of all, this mess is hosted by a super-tanned, supercharged version of Bravo’s Andy Cohen named Steve Ward.  Apparently, Steve is a dating expert and has a reputation for being quite the ladies’ man despite being 5’2” and having a voice like Charlotte’s wedding planner on Sex and the City.

Steve takes in eight lonely, desperate women who are looking for love and puts them through a dating boot camp from which they will emerge ready for their dream relationship.  From the looks of it, this is going to be no small task.  The ladies in question include a fiery telenovela actress with a penchant for Botox and lip injections, a pretty blonde who has been on thirty-seven first dates in the last year, a go-go dancer with a heart of gold and a tough Cuban-American with a mean girl attitude.  There’s also a pretty Brit with a clothing line who seems kind of like an expensive hooker.  I think I actually know her. 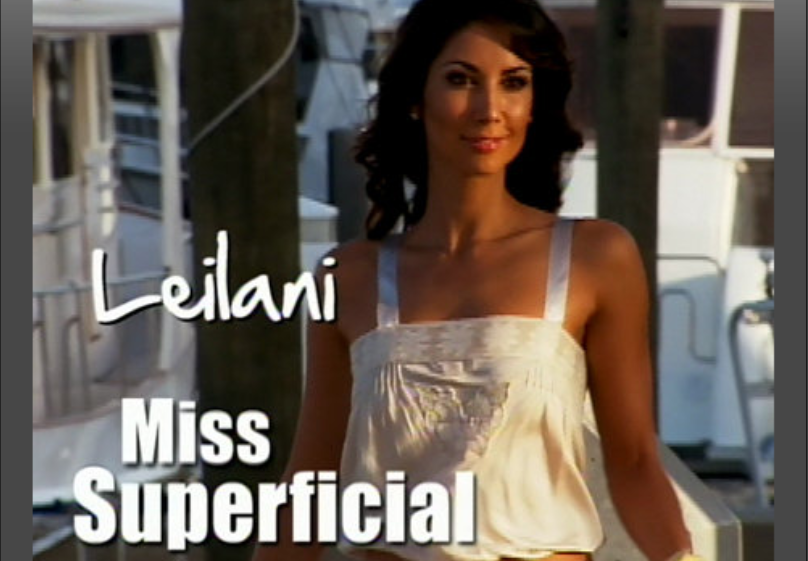 There is no caption to beat these graphics.

Once we’ve been introduced to all eight, they are immediately presented with their first challenge:  to walk into a nightclub past a bunch of guys standing at the bar.  Big deal, right?  Well, these train wrecks still managed to fuck it up.  I will give them that it was a little awkward because it was clearly the middle of the day and there’s something inherently icky about being in a nightclub when the sun’s beating down outside, but how hard is it to be personable to a bunch of guys obviously trucked in to meet your ass when you’re on a show about dating?  A few of the girls smiled and introduced themselves but most of them sailed past without even acknowledging that anyone was standing there.  The purpose of this exercise, we find, was to gauge the first impressions that they made and these dudes don’t hold back.  They label one girl “a wallflower and definitely someone I would forget,” call Cuban girl, Jane, “ugly” and say that our curvy Latin actress dresses like a slut.  Well, they’re not far off on that one.

Claudia, the telenovela star. It starts out like this, and the next thing you know you're Jocelyn Wildenstein.

When the limo pulls up to the cheesy McMansion that the ladies will be calling home, and they find there will be five of them sleeping in one room, I think we’ve just moved over into “Bad Girls’ Club: Miami” territory.  The tears and hysterics didn’t stop there but I did.

Anyway, last week’s Spring 2012 shows in Milan gave us a pretty good sense of some clear trends, but Paris was all over the fucking place.  We had Sci-Fi warrior women at Gareth Pugh, life-sized doll clothes at Viktor & Rolf and everything in between.  The fun really started on the second day at Balenciaga’s Thursday show.  I didn’t think the clothes were much fun but the plastic benches breaking one after another, sending fashion editors from around the world spilling onto the floor is pretty damn hilarious.  Everyone had to stand for the show, which caused some to remark that it was like a church worshipping “at the altar of Nicolas Ghesquière.”  I don’t know.  I certainly didn’t get it.

Rick Owens later that day was directional, as always, but I think he has softened and added much grace or what he dubbed “stately elegance” to his style.  The show was really one of the more interesting to watch, too, as the models are “beamed” in and out like regal space aliens through the rays of light.

Friday saw Christian Dior, which was very pretty but very safe, pulling out all the most iconic Dior signatures and putting them together in quite wearable ways.  When you think about it, this was a genius move after the disastrous Fall Couture collection this summer that put interim designer Bill Gayyten in the fashion doghouse.  I personally thought it a bit boring at first but when I saw the clothes in motion, I fell in love with the flirty dresses in the middle and the sheer evening looks at the end.

Haider Ackermann on Saturday brought us rich, gorgeous silks in jewel tones and huge, luxurious trousers and Celine’s Sunday show, at the other end of the spectrum, was puritanical but well cut, followed by an appropriately Galliano-inspired John Galliano and pale, sleek and modern Givenchy.  Tuesday brought the heavy hitters Chanel, Valentino and Alexander McQueen or, as my friend, the fabulous M. Fay of the AmateurCouture blog calls them, “the Holy Trinity.”  There had been some talk here and there about ocean themes through the Paris collections but the underwater creatures were right in your face at Chanel.  I didn’t love the collection, though.  It was kind of shapeless and, despite the light spring palette, rather drab in the middle of that huge mess of a sparkling ocean floor they created.

Chanel has a Little Mermaid moment.

It wasn’t until the explosion of lace in the other two shows that I got something I could really put my finger on and see that many very lovely things were destined for the ladies in a few months.  Valentino was stunning and the lace made a huge impact in an original way, with cutouts inspired by early 20th Century Mexico.  A few of the gowns became a bit period costume, especially when you view them together, but this was beautifully light collection that struck a balance between sexy and ladylike.

Designer Sarah Burton described her collection for Alexander McQueen that evening as “a lace fantasy” and she wasn’t far off.  It was also inspired by seashells, underwater creatures and the ocean bed but she didn’t actually have to construct the ocean bed for us to get that.  As Style.com’s Tim Blanks accurately stated, “Lagerfeld’s models were nymphs; Sarah Burton’s were goddesses.”  There were some bizarre bondage looks in there and a couple of things that reminded me of the iconic scene in Priscilla, Queen of the Desert where the drag queens climb up Ayers Rock in their feathered frocks but, hey, inspiration can come from anywhere as long as you make it beautiful.

Until next time, much love,