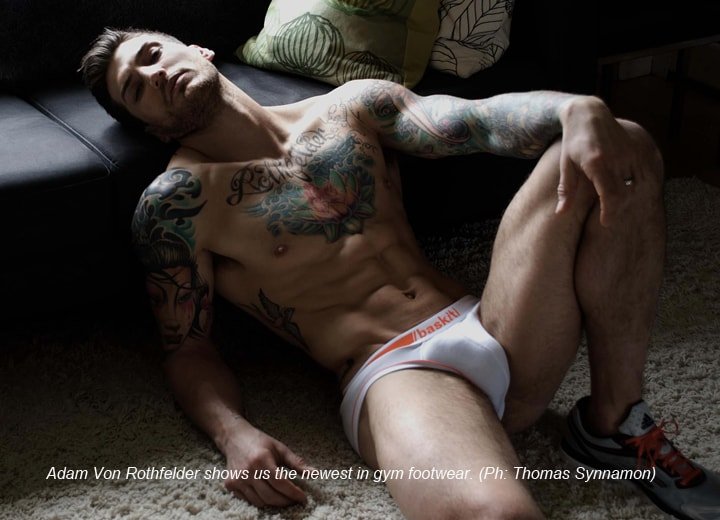 I caught a few minutes of the Shahs of Sunset pilot when I was running on the treadmill last week, but sweat and subtitles didn’t really seem the correct fit for this show about Persian-Americans living the high life in Beverly Hills.  I thought my Persian friends would expect better so I DVR’d the latest, popped open a bottle of champagne and watched it over the weekend.

Thank god for the champagne because this thing starts with the typical reality series introduction of cast members in soft focus talking about how awesomely awesome they are.  It was interesting how they went in descending order of hotness, from delicate GG and muscular Mike on down to shlubby, balding Sammy, but you’d hope that if they just get one line to describe themselves, they’d be less stupid about it.

Once the intros are out of the way, we join super-gay Reza and his curvy best friend MJ as they walk into Spanish Kitchen on La Cienega, which has not been a cool place to go since about 2003.  The producers probably would have preferred the exclusive Soho House or someplace equally trendy, but I can just imagine the producers calling to set it up:  “Hello!  Hey, so we’re filming this great new reality series for Bravo, kind of like the Real Housewives franchise but with hip, cool Persian-Americans and wanted to give you the opportunity to…hello?  Are you there?  Hello?”  Well, Spanish Kitchen said yes but they still made them film in the middle of the day. So anyway, Reza and MJ fake-discuss their open house, presumably to build upon the premise that they are realtors, until GG shows up to dish on a Persian pool party to which their hunky friend Mike, who would be a perfect fit on Jersey Shore, brought some hot, stripper chick.  GG seems to have a crush on Mike and knocks his girlfriend’s trampy style by saying that she’s not “subtle or classy” while she herself is wearing a hot pink top with huge sparking stones lining the plunging neckline.  Then they go after fellow cast mate Asa’s nutty ballerina-farmhand outfit, making it one pool party I’m glad I missed.

Then we find they are planning to do Las Vegas “Persian Style” for Reza’s upcoming birthday bash.  I’m not sure what that means but it probably involves lots of gold leaf and other shiny things, and tons of cologne.  If the montage of their party preparation is any indication, Persians must meticulously lay out as much designer logo shit on the bed and around the room as possible before deciding what to wear or pack.  I did not know this.  Well, except for Asa, that is.  That bitch just throws piles of clothes on the bed—mostly thongs, from the look of it—and says, “I don’t plan my outfits.  That’s corny.”  I say better to be corny than look like a tranny hooker on Santa Monica Boulevard.  I don’t plan my outfits, either, but since I don’t have a lot of clothes that a blind stripper would wear, I’m pretty much okay.

About this time, I checked in with my friend Ali, who is so Persian I’ve never been able spell his last name, and he confirmed my suspicion that Shahs doesn’t represent the community accurately.  Something he said about the hospitality, the culture of giving and of taking care of friends, which isn’t apparent in this show, particularly stood out, probably because of my experience with so many warm, gracious Persian-American clients and friends over the years.  They love their crystal chandeliers and are always the first to ask where the sale stuff is but they won’t let you leave their house without making sure you’re overfed and happy.

Apparently, these other bitches’ idea of hospitality is to shuttle your ass all over Los Angeles in a big limo-van with a stripper pole, take you on a tacky private jet to Vegas where you emerge from a shiny silver limo at Aria and check into an enormous suite with a cavernous main room.  The big circular staircase that floats in the middle of the suite may prove problematic if they plan on being this wasted all weekend, though, because they started drinking in L.A. and don’t look like they’re planning on taking a break.  I think they’re all pretty much already hammered when they get to dinner, and by the time they’re in the nightclub drinking straight from the bottles, it’s Hot Mess City. Eat your hearts out, ayatollahs.

I can’t really judge because I had my own hot mess moment just last week.  We celebrated our friend Gillian’s birthday with margaritas and champagne and just before bed, I tossed some shorts and a shirt into my gym bag for the next day’s workout.  Esperanza the housekeeper hadn’t been able to wash my regular gym clothes so I had to rummage around a little in the dark for something else.

When I opened the bag in the locker room the next evening, it turned out that I’d put hunter green gym shorts and an army green ribbed tank top in there.  I tried in vain to break up all that green with my navy workout towel but I soon had to put down the towel down to pick up the only remaining Swiss ball for my abs exercises.  Of course, it was bright green.  If this were an audition for a Teletubbies workout video, I’d have knocked it out of the park. After that, you may be wary of my advice on gym clothes so I checked out what people were saying in magazines and online about the latest in workout stuff.  I discovered that, aside from some injections of neon bright color and more technical engineering of fabrics, there’s really nothing revolutionary so I’m just going to lay it out for you.  Of course, what you wear will depend on your workout.  If you’re running or spinning, you’ll probably want those technically engineered things we mentioned, but most of us just go to the gym for weights and cardio so we can get away with just the basics.  Here they are:

Shirts:  You have lots of options, from tanks to t-shirts to sweatshirts.  Make sure that whatever you choose, it’s comfortable for exercising and not too tight.  I recommend solid, darker colors that have been through the washing machine a few times because that means it looks like you wash your clothes.  If you look good in brighter colors, I’m okay with that, too. D&G does it right.

As in the outside world, steer clear of ironic sayings and if you insist on wearing a gym logo, make sure it’s from a gym that is at least one step above the one your working out in.  That way, it looks like you’re slumming.  For example, you can wear a Gold’s shirt at Bally’s or an Equinox shirt at Gold’s but never wear a Gold’s shirt at Gold’s or, god forbid, a Bally’s shirt at Equinox.  That would be all kinds of wrong.  And those shirts with the completely cutout sides only work on 2% of guys.  You are probably not that guy. Shorts:  I personally prefer soft shorts made of sweatshirt material in heather gray or navy but if you want to wear the ones that basketball or rugby players wear, I’m all for that, too.  I’ve had really good luck with Go-Softwear and Andrew Christian but there are lots of other options.  The narrower sweats and track pants like the ones by Nike are cool if want to go long but please stay away from short-shorts and cycling shorts because I don’t want to see your junk, especially when it’s squished into spandex.

Shoes:  There are so many shoe options but you have to try on lots of different brands to find out what work best for your foot.  I found some great Saucony trainers for about $75 and I always pick neutral grey and white combinations because they look fresh but go with everything.  I know that bright yellow or green ones are really big right now but I don’t want to be looking down and seeing those things three or four times a week, even if it is just for an hour or so at a time.  Replace your shoes when you see tiny grooves that run horizontal to the ground developing in the soles.  Those lines mean they’re not doing their cushioning job anymore and you need a new pair.

Since the ladies are Delicate Flowers, they get to wear more fitted and body-conscious workout gear without looking like a tool.  Just don’t use Olivia Newton-John’s “Physical” video as a guide and please don’t wear things that go up your butt.  I would still love to see a girl in cutoff sweats and a sleeveless hoodie and, now that things have become so body-conscious and exposed at the gym, there’s a chance that Tomboy Chic could be the answer to that.  On a side note, stop wearing your damn yoga gear all over town.  Lululemon is for yoga and the gym, not the rest of your life.  If you want to run around Beverly Hills, put some fucking clothes on. Celebs chicks styling for a workout.