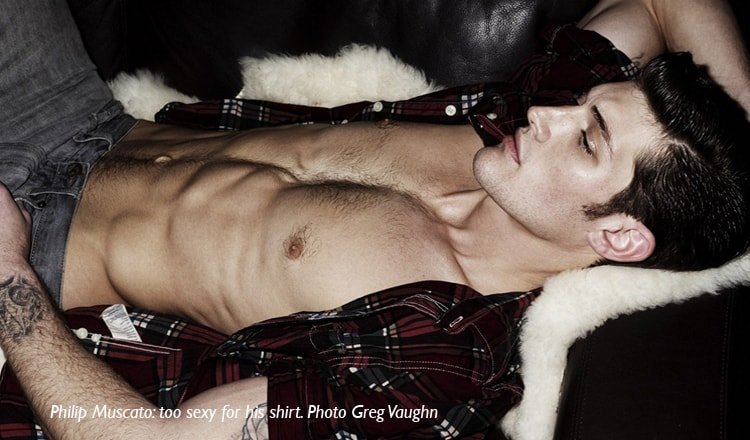 Despite the efforts of these hapless yet well-dressed kids, some at eDrop-Off were not so sure about this sale.  Brand Manager Nicole, who looks like a younger, less-cigarette-smoking version of fashion goddess Carine Roitfeld with her horizontal eyebrows, was particularly skeptical, voicing her disapproval at every opportunity and seeming especially incensed that it was happening on a Saturday, like she was going to miss her favorite yoga class or something.

Send in the clowns.

Well, people started lining up at 3am to get two years’ worth of eDrop-Off’s unsold stuff and the 3,000 pounds of clothes and accessories were gone in an hour.  This should have left Nicole backpedalling except the entire event made only seven grand and thousands of angry shoppers were left empty-handed in the street.

The best part of the episode was a little side trip that Nicole and eDrop-Off owner Corri took to consult with potential client LaToiya, a pretty African-American girl whose one-bedroom apartment was filled with so many clothes, shoes and handbags that there was no place to sit down.  She admitted that she had a problem, partly due to her party girl alter ego named Tata, but she still justified every garment by saying, “Well, I did wear it once last year.”  Even once was one too many times for most of those ugly-assed clothes.

When Corri clocks a fake Gucci bag that LaToiya’s ex-boyfriend gave her, I was reminded of an old friend whose parents were both celebrities, who said to me very seriously one day, “I can spot a fake Prada from a hundred yards,” as if she were explaining her propensity for nuclear physics.  And damn, that bitch could, too.

Watching LaToiya wade through piles of stuff that she hadn’t worn in years, I thought about that sheer black short-sleeved Gucci shirt hanging dejectedly in my closet and sent out a Tweet about how this show was making me want to throw all my clothes out.  Corri herself Tweeted back that I should contact eDrop-Off because they have nationwide free pickup.  I hope she didn’t see my previous Tweet about how she runs a fashion business but can’t pronounce “Louboutin” properly.

Anyway, the thought of parting with some old favorites seemed more attractive if I could get a little cash for them so I resolved to call eDrop-Off as soon as possible.  When I mentioned this plan to my fashion-savvy friend Mary, she asked if her boyfriend Nathan could have a look before I sent it all away to be sold to creepy strangers on eBay.

Chef Nathan in my former shirt.

We settled on Sunday night for trying on clothes over champagne and cheese which meant that I had to go through my shit that morning to find out what I could live without, which could be a challenging proposition considering the beautifully made suits I’ve held onto for a decade without wearing them once.  Somehow, the prospect of being paid even a small amount of their original value made me bolder this time and I was able to pull out, among other things, those three Savile Row-style pinstripe suits, the Gucci shirt that I loved so much but can’t get off over my biceps, some amazing Armani trousers and some striped cotton Thomas Pink shirts that look great but just don’t suit my style anymore.

The evening was a resounding success.  Well into the first bottle of champagne, Mary and I dragged poor Nathan off and made him try on things he’d probably never choose on his own.  The jeans were too short, but we were amazed that so many of my clothes fit his taller, lankier frame perfectly.  After treating us all to an exquisite seared Ahi and mandarin orange salad made from about twelve thousand individually packaged ingredients that chef-by-trade Nathan carted along with him, they left with an armload of amazing clothes that will have a new life.

Now that I’ve started the ball rolling, here are some tips on Spring Cleaning in your own closet:

1.  Start by taking every last thing out of your closet and only put back what you know you want to keep.  You will definitely be less likely to think to yourself, “I might wear that pink terrycloth jumpsuit again” if you have to physically pick it up and hang it in there.

2.  The basic rule is if you haven’t worn it in the last year, you might want to get rid of it.  It’s a good general guideline, but I haven’t worn my tuxedo in the last twelve months and I’m not tossing that on the pile.

3.  If it doesn’t fit, you must acquit.  Okay, that sentence doesn’t make literal sense, but it sounds great.  I’m trying to say that if you haven’t been able to squeeze into those jeans for the last couple of years, you probably won’t anytime soon.  This was a sad realization I just had with a pair of size 29 Helmut Langs that will soon be gracing someone else’s ass.

Nathan and Mary on the sofa. No, my throw cushions are not for sale.

4.  If it needs repair that you don’t feel like doing, it’s not worth keeping.  Consider it a sign if you can’t spare the time to sew on a button or have a hole darned.

5.  Check out next season’s collections before sorting through your stuff.  If you’re familiar with upcoming trends, colors and cuts you’ll be less likely to toss out a jacket that’ll be all the rage in a few months.

7.  Let it go!  You won’t miss it.  I’ve never once thought about something I’d sold or donated and wished I had it back.  If it’s a designer label in good condition you could make a few bucks through consignment or Buffalo Exchange; everything else should go to a worthwhile charity like Out of the Closet or your local women’s shelter.

So, imagine what it would be like to love everything that’s hanging in your closet!  It may not be easy to get started, but you’ll feel great once you get in there and lighten that load.  I help people sort out their fashion lives for a living and it even took me a while to do it for myself.  I feel much better as a result and I think Nathan’s wardrobe doesn’t mind too much, either.