After an incredibly long day of working my magic with recently discounted designer duds the other day, I finally reached my little jewel box of an apartment perched high on a Hollywood hill, where I pulled on my pajama bottoms, mixed a low-carb margarita and scrolled down the list of available TV shows.  The E! Network had a rare break in its celebration of all things Kardashian for something called “Scouted,” which was described as following aspiring models “as they are plucked from obscurity and put to the test in New York’s ultra-competitive, high-fashion, professional modeling industry.”  So, of course, I tuned in.

Basically, a couple of girls are chosen by one of four regional scouts for a big New York City modeling agency that I’ve never heard of, then they deal with their shit at home before flying to New York for a makeover, a test shoot and a meeting with the agents.  The episode I saw featured a rich blonde from Dallas and a pretty black girl from northern California with an overbearing, borderline-rude mother.  Texan girl Gillian’s obstacle seems to be that her retired NFL-player father is terminally ill but she wants him to come witness her NYC triumph anyway.  As they walk down the corridor, arm in arm and excited for the trip, I notice that her real obstacle is her big ass and the fact that she’s a little on the short side.  New York will eat that bitch alive.

Jennifer and Gillian get a taste of how every working model's day begins: getting your hair tugged.

Our California girl Jennifer is a lovely gap-toothed sweetheart who forgets to bring her portfolio on her test audition but they take her to the city anyway because this is modeling, after all, not a fucking IQ test.  Her bossy mother comes along but is observant enough to know that the bitchiness she radiates is interfering with Jennifer’s shoot and ducks into the other room.  Jennifer’s performance improves but is still limited to things she learned from watching America’s Next Top Model so she doesn’t get signed while the rich white girl who’ll probably inherit a lot of dough when her dad kicks it does.  Who said life was fair?

All that conflict and drama sounds like it would make for an interesting episode, though, right?  Well, it was like watching paint dry.  The pacing on this show is so damn slow and the emotional investment so minimal that you’re better off watching cute cat videos on YouTube.

The thing about modeling shows in general is that, by the time they’re old enough to be on a reality show, they’re too old to get started in any serious way in the business.  The agencies want those girls at 15 or 16, and 18 is really pushing it.  Most of the ANTM entries are 20-plus and, if they make the All Stars show three or four years later, they’re so far out of the running they might as well be Janice Dickinson.

A curtain made of rods of light at the Rick Owens show this year. (From Models.com)

Now, I know we already touched briefly on Rick Owens’ collection for spring 2012 when it showed in Paris.  It was quite spectacular with the models coming like angels through the intriguing wall of light that many felt looked like the world’s biggest bug zapper.  Rick himself described walking through the beams as like being “electrocuted” in some way that relates to martyrdom, and PFC’s own fashion godmother Diane Pernet spoke about the “purity” of the collection.  “Simplicity is elegance, right?” she said, “To pare it down to just the perfect volume.”  This collection was decidedly not about sexiness but about an almost monastic austerity and regal stateliness.  The long column skirts and rounded shoulders, the simple fabrics and the otherworldly feeling that is at once medieval and completely futuristic all contribute to one of the largest achievements in fashion this year.

I met Rick and his wife, the fabulous and most French Michele Lamy, though I don’t think they were married at the time, when I first moved to L.A.  I knew that he designed clothes because he’d made an amazing white corseted dress for the actress friend of mine who had introduced us but, I didn’t think of it much then.  I saw Michele more often because she ran what was easily the chicest, hidden-away restaurant in town called Les Deux Cafés, pieced together from a gutted storefront and an old Craftsman house that had been carted into a parking lot in the middle of run-down Hollywood.

It was the kind of place where Madonna would be having dinner on the terrace while Sharon Stone was reciting her god-awful poetry in the bar and, best of all, it had no front door.  It was also a really big deal if Michele acknowledged you because she didn’t give a shit how rich or famous anyone was, just how cool.  Since her bartender Claire and executive chef Isis were my closest friends and I was there all the time, she would often give me a gravelly “bon soir” or a Parisian air kiss that got me a place at the cool kid’s table in the best place in town.

The day I heard that Michele and Rick were going to Paris—she to work for Vogue, which turned out to be not the case, and he to relocate his atelier—marked the end of the Les Deux era.  Now he is one of the fashion world’s most challenging and most admired designers and she is backing him, Gareth Pugh and perhaps other designers.  Since they both obviously have so much free time on their hands, the next step was to launch a furniture collection!

It’s taken a couple of years for Rick’s furniture, which showed in London the fall of 2009, to get back around to L.A., but I was thrilled to be invited by Michele’s daughter, the lovely artist Scarlett Rouge, to last night’s exhibition at Maxfield Gallery in West Hollywood.  The furniture pieces themselves were quite stunning in simplicity and scale.  The dark wood and white stone were the only colors but there was an interesting mix of inspiration.  My favorite piece was an alabaster chair that reminded me of ancient Egypt stripped down to its cleanest form.

At the center of the gallery were two monolithic screens, one of dark stained plywood and the other of white alabaster, and the smaller pieces were spread around them, with the huge benches lining the sides of the gallery.  I must say that even though we all realize these chairs and sofas wouldn’t be the first things you’d buy for cozying up in front of the TV, the prices shifted these creations out of the bounds of actual furniture and into the realm of fine art.  And that’s okay, but if I’m paying nearly two hundred grand for a plywood bench with some alabaster trim, I don’t want to see screw heads every couple of feet along the seat of it, whether you call it furniture or sculpture or anything else.  Then, today I was hit by the realization that, given Rick’s meticulous nature, the rough plywood and exposed screws had to be an intentional counterpoint to the exquisite alabaster.  Great.  So, now this shit is expensive and intellectually challenging.

The reception was great, though, and I’m happy that our blog-meister Killough was able to come along with me and critique the furniture and the waiters.  From the gallery curator Lena to our dedicated waiter Greg and his delicious Kobe beef bites, the staff was lovely and accommodating.  I hadn’t seen Scarlett for quite a while and she looked stunning in her organic modernist layers of black–but then, I guess she should have a pretty much bottomless wardrobe.  What really stood out was that she’s grown into such a beautiful, self-possessed young woman working the room like an elegant pro .

The exhibition “Turbo-L.A.–Monumental: Rick Owens” will be at Maxfield Gallery, 8818 Melrose Ave. in West Hollywood until 7 January 2012.  For more information call 310.275.8818 or email LenaW@MaxfieldLA.com.

Me and Scarlett (Ph: J. Killough) 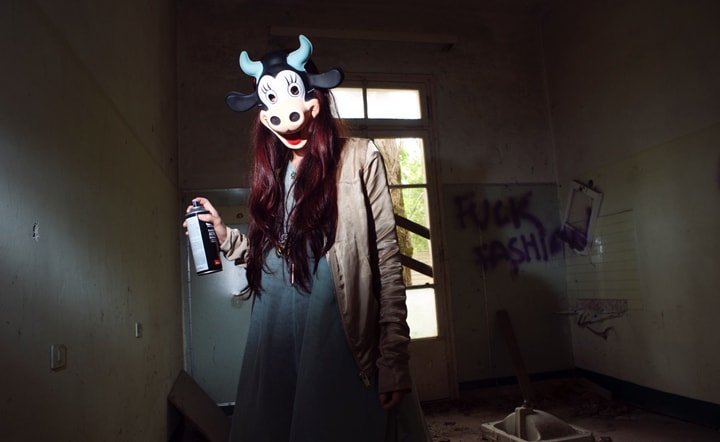