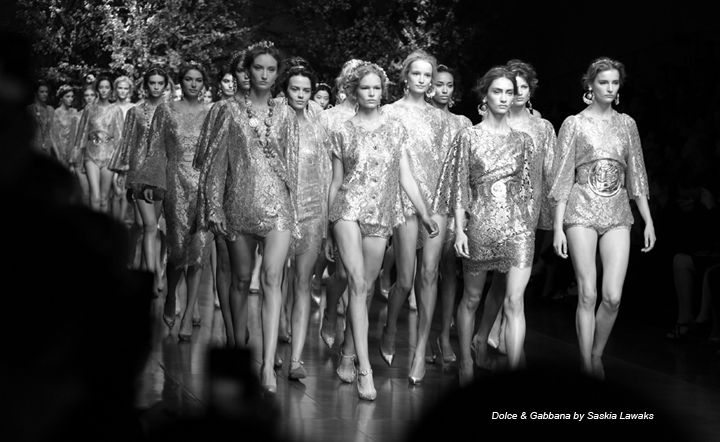 Well, it looks like we’ve come to that time in the semi-annual round of fashion weeks when I really want to be done looking at clothes.  This point might have arrived a little earlier than usual this season because many of the collections haven’t clicked for me.  There has been a lot of all white and combinations of black and white but neither is highly original in a spring collection.  There’s also been a big move toward sheer, sometimes totally see-through fabrics and this has been used to lovely effect in some cases while, in most, the garments couldn’t be worn off the runway without prompting action by law enforcement.  Both of these trends have continued through New York and London into Milan along with a general tendency toward flowing, less body conscious silhouettes with drop waists and wide arms. The incorporation of athletic elements also started to get really serious this last week, starting with Gucci‘s luxurious mix of Art Nouveau designs and workout gear and Prada‘s wacky basketball uniform details that went side-by-side with the line drawings of huge faces on skirts and coats to make it one of the more bizarre collections of the season.

Nature has been a big theme here, too, from the three-dimensional floral motifs of some pretty Dolce and Gabbana pieces to the abstract representations of the four elements—earth, wind, air and fire—that made for a scattered Missoni collection.  Giorgio Armani seemed to be drawing from nature for his two collections, as well, but after ninety-four exits at the Emporio Armani show, who the fuck knows?  I just knew that I was tired of dresses by that point.

Predominant colors, aside from the expected black and white, have also included lots of beige, pale camel, ochre, pinks, light blues and gold and nothing else that I can think of mentioning.  I hope something big emerges from the Paris shows other than that it’s okay to run around in your goddamn sports bra but let’s focus on some of the week’s bright spots.  A couple of them actually caught me off guard. First of all, I finally loved Karl Lagerfeld’s collection for Fendi, which I thought would never happen.  The laser-cut organza dresses in shades of red or of blue that opened the show moved beautifully, had a lot of life and were totally wearable.  Even accents of the lightest fur worked well for a spring collection and the whole thing reminded me of that futuristic city in Logan’s Run, which is a far cry from the barbaric looking Klingon things he sometimes sends out.  I also liked the biker chick-themed Versace show, which was dark and refreshing in this season of floating chiffon mumus.  The chains upon chains got to be a bit much but the “Versace World Tour 2014” t-shirts were genius and I want one.

Top of my list in Milan, though, goes to Roberto Cavalli for the silent movie star glamour of his knock out gowns in silver, gold and black.  Just when I thought the Jazz Age was totally played out after three seasons or so of Gatsby madness, this collection was a stunning update of the geometric beadwork, sleek lines and layers that typified high-end Art Deco dressing. There was a lightness to the pieces that I wouldn’t have imagined possible with this degree of beading and plenty of sheerness, but perfectly placed.  We’ll done, Mr. Cavalli.  Now let’s do something about your outfit.