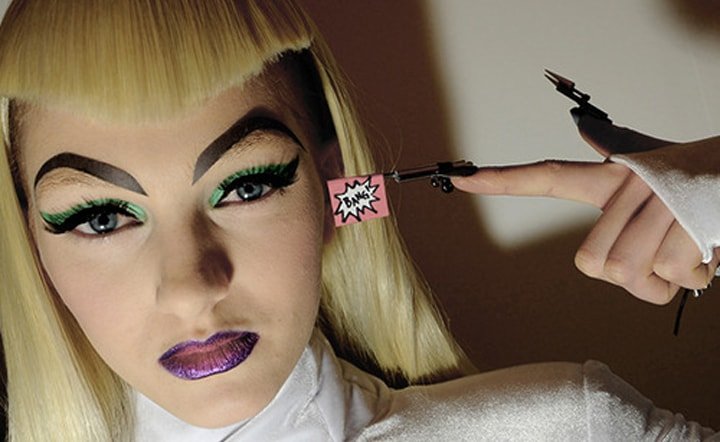 The fashion carousel spins around once again, holding many breathless in anticipation of what will be coming our way for Fall/Winter 2014-2015.  I am not so spellbound this time myself, mostly because I’m too goddamned busy running around trying to sell clothes for this spring and driving back and forth to the Desert building a skin care empire.  It would be remiss of me, though, to ignore the New York and London Fashion Weeks entirely so I’m going to share a couple of the most intriguing moments and be on my goddamned busy way.

Most go-to fashion news sources regularly fail to feature the amusing shows from The Blonds at each NYFW and I’m guessing it may have something to do with the line’s marketability.  The pieces are made to order and suited more for Rihanna and Katy Perry to wear on stage, which they frequently do, than for your average Upper East Side socialite or Malibu Barbie soccer mom to don for a parent-teacher conference.  The runway shows are also pretty camp, beginning with co-designer Phillipe Blond opening or closing most of them looking gorgeous in full drag while New York demimondaines like Amanda Lepore populate the front row, making it seem like some glittered-up basement at 1 AM. I’m no stranger to camp sensibility, even though my agonizing aesthetic tug of war between rocker cool and Italian preppy includes neither sequin nor bead.  I’m reminded of a lazy rainy Oxford afternoon lounging in my friend’s palatial rooms in Peck Quad at Christ Church, where the big cheap paper lantern that hung over the sitting room always seemed jarringly out of place amongst the eighteenth century paneling and where my friend Matthew, who is now married with two children, would eagerly pull on stockings and climb up on the radiator to entertain us with Marlene Dietrich songs as we drank gin out of a teapot.  Becca, who is now a wildly successful lawyer in Sydney, said to me once in those days, “This is ridiculous; all you boys are so camp.”  I thought she’d made a mistake by including me and replied, “Oh, but you don’t mean me, obviously.”  She looked surprised.  “Are you kidding?  You’re camp as fuck!”  I didn’t see it then and guess I’ve sort of outgrown it now.

More to the point, camp-as-fuck designers David and Phillipe Blond seem to be able to switch effortlessly from Japanese anime to Tippi Hedren or Psycho for references without a care what’s happening in the outside fashion world but what most draws me to always see what they’re doing is their fantastic sense of humor.  This season’s Catwoman-themed “Gotham Blond” collection was no exception.  Instead of being too literal with the latex, they used the Selena Kyle character from the Batman comics to inform a range of looks from kitten pictures to an ensemble entirely of kitty-friendly yarn and even threw in a couple of Joker and Poison Ivy references.  There were definitely the showgirl bustiers and the sexy catsuits for which The Blonds are known even when it isn’t a Catwoman show but the wider range was refreshing and inching even a teensy bit closer to mainstream fashion.

On to the U.K., where crazy weather humorously stranded some of the fashion elite, including Vogue’s Anna Wintour, in not-so-fashionable Newcastle as the shows began in London.  Usually quite eclectic, the London collections actually started to present a cohesive picture of what to expect in autumn with more shiny plastic-like stuff and metallic effects, 60s shapes and 70s colors of brown, orange and mustard.

I know.  It sounds dreadful.

But we’re not going to worry about the big picture right now.  Like I said, it’s highlights, people!  For me, in London this would have to be the Erdem show because it encompassed so many inspirations that I love: Romanovs escaping the revolutionaries with their jewels, Velasquez’s paintings of pale infantas, eighteenth century botanical prints and more.  This came through in embroideries left deliberately unfinished, slashes in sleeves and at shoulders and transferred to some of those 60s shapes in shifts and coatdresses.  The colors were primarily black, ivory and gold with hint of Wedgewood blue and the textures were all over the place with a lot of lace and embroidery and beautifully placed big stones.  It was feminine, as Mr. Moralioglu’s clothes always are, but also kind of badass, like the girl wearing one of those dresses could daintly sip champagne then snort a big line and kick you in the nuts if you looked at her funny.  In short, awesome.

Let’s see what Milan has in store, shall we?