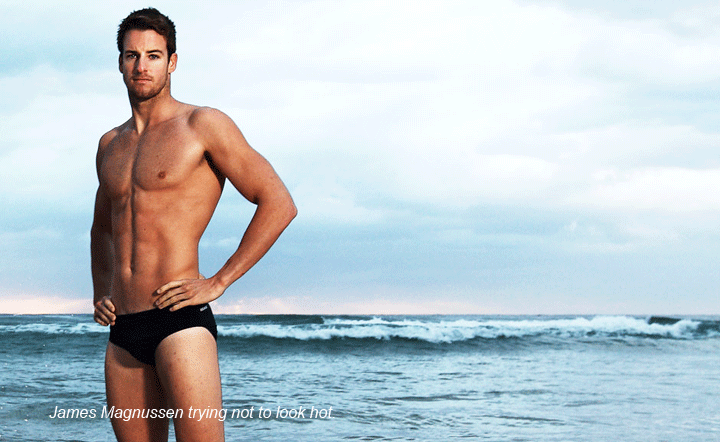 There were also some sporting contests in those early days, of which the men’s swimming was particularly interesting and where I developed a brief and intense crush on U.S. swimmer Ryan Lochte after he won a medal for the race where they do a lot of different strokes.  He doesn’t photograph particularly well, though, which is why there could never be any hope for him and me and also why the lead image for this article is one of the hunky Australian swimmer James Magnussen, who does.

This brings me to an analysis of the fashion of our 2012 Olympic Games and, just between you and me, this isn’t really fashion; it’s just a slow news week.

Either way, let’s start at the bottom.  I didn’t get a look at what the Mexican teams were competing in but their Opening Ceremonies outfits were a hot fucking mess.  Brightly colored, bedazzled T-shirts and sombreros are good for Tijuana tourists but not really for representing a culturally rich nation at the London Games.  Tying for worst are New Zealand’s dowdy outfits designed by Rodd & Gunn when they obviously thought it was for the Senior Olympics.  I’m sure they just read the order wrong and thought that the competitions included Pudding Eating and Complaining About Loud Music. The German shiny pink and baby blue parkas that look just right for the Winter Olympics in Candy Land are less horrible.  They are obviously a ploy by the Germans to seem fun and playful while they’re politically lashing the less austere Europeans to the economic mast.  I was also not thrilled with Spain’s wacky Keith Haring-looking stuff and the athletes were complaining about it, too, but when your national colors are red and yellow, you’re almost assured to look like you work at a fast food restaurant.

I thought Stella McCartney’s vision for the UK outfits was fine but it went a little too Superhero, especially after their Druid goddesses stomped around the track at the Opening Ceremonies.  The U.S. and Italy were both okay, as well.  Ralph Lauren’s China-made ensembles were sharp but not good enough to merit all the fuss and Giorgio Armani’s suits get extra points for beautiful construction, though classic black suits on the fittest athletes in the world is really an opportunity missed.

High marks go to Australia in their green blazers.  They may look a bit like they should be taking your drink order in the first class cabin on Qantas but, hey, it’s first class! My top two picks are very different but quite strong in their own ways.  The Netherlands’ ensembles by SuitSupply, which I’ve never heard of, were incredible.  Orange trousers!  Blue frock coats!  It was an amazing combination of color and cut that was toned down with just enough traditional styling.  The Chinese, on the other hand, embraced history in a different way with their sharp, graphic red-and-yellow designs that owe a large debt to Soviet imagery of the 1930s and I have to award them high marks for their We-Own-The-World-So-Suck-It athletic optimism.  Even though China is realistically about as communist as my Republican cousins who still think Obama was born in the Philippines, it was a stylistic victory I admire.