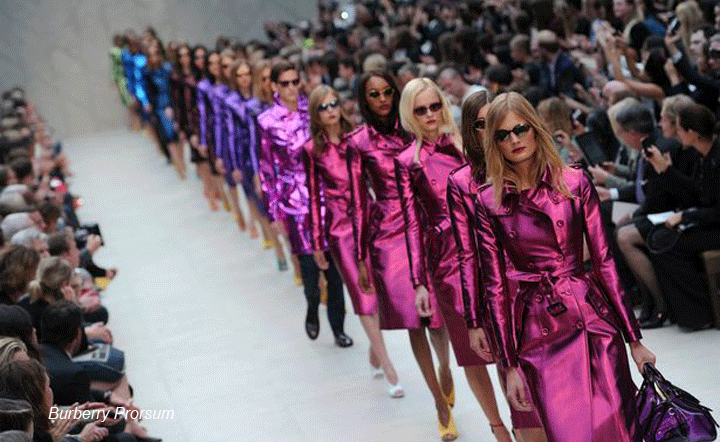 Mary Katrantzou thought outside the box with beautiful abstract prints from postage stamps and banknotes that looked vaguely Eastern European-meets-Traditional Chinese on her dramatic shapes.  The intricately printed crystal mesh pieces at the end were a sensational wash of pastels.

Monday brought us some variety that began with Erdem’s signature lace bizarrely punctuated with python panels that were inspired by alien women in 1950s science fiction.  His rounded shoulders and classic lines were also borrowed from the 50s but the super sheer fabrics that showed up yet again made me think we’d better start focusing on spring underwear trends, too.  The Burberry Prorsum show in the afternoon brought us rainbow metallic cellophane on skirts, tops and dresses and, of course, trench coats.  The timeless shapes in pale camels toward the middle of the show were infinitely more wearable but the shiny trench coat finale in Skittles colors are what we’ll all remember.  Giles Deacon went to the opposite end of the color trend spectrum with a black and white Goth-y collection of spider web and Pegasus motifs that was very cool.

The final day brought Mulberry’s small-scale floral prints in greens, golds and blues on loose fitting ensembles complimented by some nice car coats before Roksanda Ilincik closed it down with the last word in color blocking in some bright, bright hues.  Shapes were soft and a bit 70s with long skirts, Peter Pan collars and mutton sleeves.  Those final looks that seemed made of plastic bags weren’t my favorites but they’ll be quite practical in next year’s London spring weather.

Check out my slideshow of pix below.  See you in Milan!