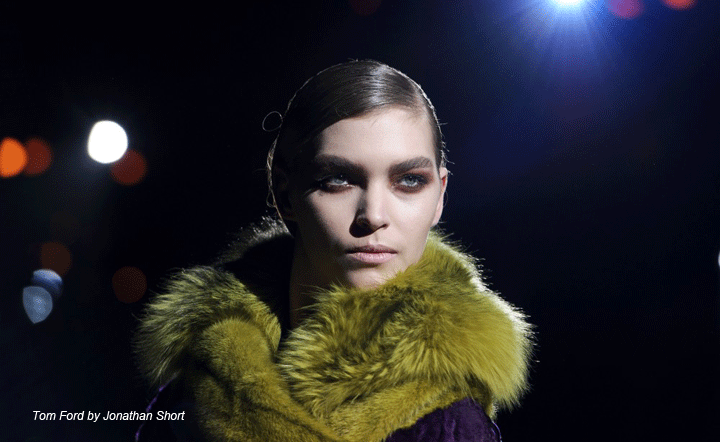 Today’s first order of business is the shocking double elimination on Monday’s RuPaul’s Drag Race.  I’m sure you saw it but just in case you didn’t, I’ll sketch it out for you so you don’t embarrass yourself when conversing with more worldly types.  It started with all the queens doing a crazy dance in huge Afro wigs, and the top two became captains of teams that were to choreograph and perform ballets based on the life of RuPaul.  Got that?  Then there was some drag Black Swan action and Vivienne Pinay and Honey Mahogany from the losing team had to Lip Synch for Their Life.  They were both pretty boring and neither of them was really bringing it in the lip synch, but it was still a shock when Ru kicked those bitches both off.  Looks like mama ain’t foolin’ this season! In other WTF news, London Fashion Week just wrapped up and it was all over the place with some fall collections based on pale pink and others with flowers everywhere.  The big florals started at Clements Ribeiro on Saturday, mixed with tartan or red lace on elongated schoolgirl silhouettes that were quite pretty.  Sunday saw Mulberry’s small floral prints and big plaids in a collection that emphasized a 70s color palette of orange, green and burgundy.  Rounded shoulders and oversized sleeves were a focus there.  Temperley London went back to early-60s Tippi Hedren for inspiration in a classic collection of black over ivory, then blue, jade and all black dresses and a couple of great swing coats.  The evening pieces were more reminiscent of Audrey Hepburn in the Embassy Ball scene in My Fair Lady but that was almost the same year as The Birds so that works for me.

Mary Katrantzou showed an uncharacteristically colorless collection of mostly printed silks in ghostly black and gray.  Where her strength has been in rainbow hued prints, it now appears in interesting Japanese obi-like lines.  I wish I could say the same about Paul Smith but those mix-and-match jewel tones and 90s slouchy shapes weren’t nearly successful as his men’s collection last month.  The metallic red skinny motorcycle pants at the end were pretty cool, though.

A lot of the most important shows ended up being on Monday beginning with Christopher Kane, who celebrated his merger with luxury giant PPR in January with a broad collection of his earlier themes.  My favorite was a line of camouflage prints in different color combinations of traditional grays but also in wine tones or blues.  A sweater and skirt set appliquéd with silk flowers was a close second.  Erdem also returned to his familiar florals but surprised everyone by ditching his usual ladylike colors in favor of black and dark blue with pops of burgundy or acid green.  Ostrich feathers were interestingly employed, stitched onto bodices or trapped under black chiffon. The big Burberry Prorsum show attempted again to energize the trench coat, this time by evoking Christine Keeler of the Profumo sex scandal that threatened to bring down the British government in the early 60s.  There were large-scale animal prints of every kind and skirts and sleeves of see-though colored latex that gave a feeling of sexed-up classics, but I don’t know why they decided to have some guy start playing the piano and singing halfway through the show.  Maybe he’s somebody’s nephew.

Giles Deacon’s show was quite dramatic, with zombie angels in gowns of billowing sleeves and voluminous skirts that began in whites and gold then appeared in red and finally, to signify a choice between heaven and hell, in black.  Whichever spot the wearer ends up, they’ll be exquisitely dressed.

Finally, we come to the weirdness of the Tuesday shows where Roksanda Ilincic showed a range of pale pink, hospital green and burgundy and some shiny stuff.  If that sounds kind of ugly, it was.  To cap the week off, we had the black and white Meadham Kirchhoff collection that made me think of the maids and aristos of Downton Abbey… if they all had a rubber fetish, that is.  Some of the dresses were quite lovely but the Kewpie doll styling made it seem too odd, or they just used models with super large heads.

It seems that London Fashion Week in general has usually been pretty weird, sometimes more of an art show than anything else.  Aside from the crazier stuff, though, there was a lot that was quite wearable this season.  Designers of the ladylike remained as true to themselves as the more theatrical and Burberry found a way to churn out more trench coats.  Some emerging trends were the boxy jackets, a little punk inspiration and lots of PVC, coral and pink and flowers for winter and a feeling at some shows that we might call “ghostliness.”  Happy Haunting!