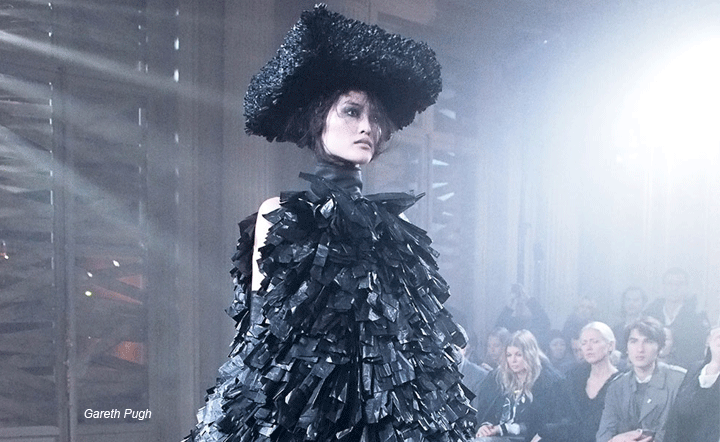 Don’t worry; you’re not going crazy.  It’s just the designers of Paris Fashion Week doing their best to knock your ass back into the 1990s.  Want one of Phoebe’s oversized blazers?  They’ll be at Dries Van Noten in a few months.  While you’re at it, Chloé will have Monica’s suspenders and almost everyone else will have baggy pleated pants.  You’ll be able to dress up like Rachel for Halloween and not even have to wear anything old!  Am I the only one who thinks this is a problem? This all started in Milan last week at shows like MaxMara and Emporio Armani—hell, maybe it was in London or New York but I’ve seen so many fucking clothes since then that I can’t remember back that far—and it looks like it’s only getting more intensely 90s-like.  This slouchy suiting idea came in a lot of different guises, from Henley Regatta stripes and gold fringe at the aforementioned Dries show or the massive wide-lapelled coats at Céline to the boxy, mannish tailoring at Stella McCartney that came in sober pinstripes and more playful plaids.  And just when we thought the ladylike pump was making a comeback, we are faced with a choice between clunky boots or the flat oxfords that gave an edge to Lanvin’s girly butterfly-printed cocktail dresses and no-waist looks reminiscent of 1910s Paul Poiret.

The spring trend most likely to carry over into fall is definitely the classic combination of black and white that characterized Alexander Wang’s first collection for Balenciaga, which actually wasn’t too bad.  I quite liked his reinterpretation of the house’s iconic shapes like the rounded-shoulder jacket and the crackled-paint effect on some of the pieces.  Black and white was also big at Alexander McQueen, Lanvin, Rick Owens, Viktor & Rolf, Christian Dior, Ann Demeulemeester and Hermès.  Between you and me, the all-black sheer layered numbers that closed yesterday’s Chanel show were among my favorites from La Lagerfeld in ages.

The trend that I’m most doubtful about, on the other hand, is the early 90s Grunge aesthetic that Hedi Slimane tried out in his second women’s collection for Saint Laurent.  The sparkly tights were fun, but there wasn’t anything you couldn’t pull together by heading to your nearest Goodwill with some old pictures of Courtney Love for inspiration.  And I don’t know if you’d call the Givenchy collection Grunge, or maybe Gypsy-Grunge, but I hated it.  The poor models had their hair done to look like weirdly colored bathing caps then had to listen to some fat guy in a dress wail on as they walked the runway in some seriously ugly clothes.  After the last two glorious seasons, it was a big disappointment.  I was also really put off by Balmain’s bad, bad early 1980s mess of enormous shoulders and baggy pants in various colors of shiny quilted lamé.  If anyone could pull that shit off, it’s Grace Jones and I’m pretty sure she doesn’t want to. Outside Balmain, it wasn’t all 90s all the time in Paris this last week.  There was an otherworldly trio of collections that stood completely apart from the others, though they seemed to have a kindred spirit between them.  First was Gareth Pugh’s haunting, ethereal offering of full-skirted gowns under intricately folded jackets and coats in ivory and black, some in masterfully handled shearling.  The section of silk gazar and cotton ensembles in deep blue stood out beautifully, so much so I’m slightly obsessed with that color now.  The next day, Pugh’s mentor Rick Owens’ show of windblown beauties opened with the one thing I never thought I’d see at a Rick Owens show: miniskirts!  The collection, again almost entirely black and white, had some great layering, trailing long scarves behind his characteristic big boots, which will now sport needle-thin heels.

Ann Demeulemeester, the other designer in this accidental trinity, started her show with long, flowing white robes that looked even better with masculine, vaguely military jackets over them.  Once again, the entire collection was comprised of black and white but it was striking how many lovely variations on this simple theme could come in one collection.

Honorable Mentions go to Alexander McQueen’s Elizabethan showgirls, the schoolgirl inspiration at Valentino and Chloé, Raf Simons for finally getting his shit together at Dior, and the effortless, luxurious chic of Hermès.

Thanks for coming on this fashion week marathon with me.  It was a lovely ride but, damn, I’m glad it’s over.