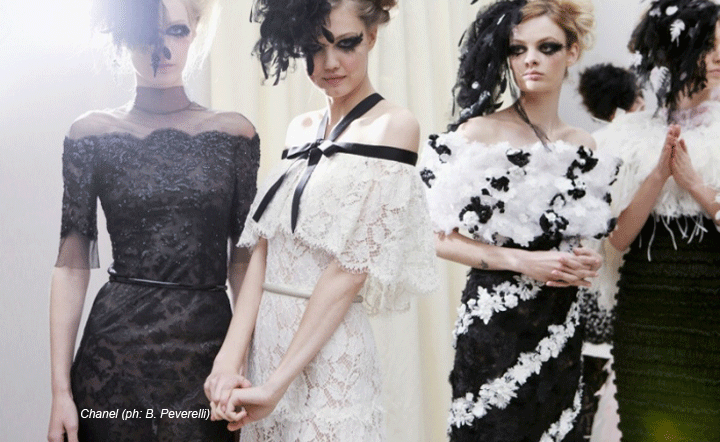 We all know that Paris is one of the most beautiful cities in the world but, from what I remember about living there, things can get a little messy, too.  One has to remember, for instance, not to focus too much on the striking architecture because you’ll otherwise step in dog shit about every thirty seconds.  It shouldn’t have surprised me, then, that the recent Paris men’s collections seemed a little nutty especially after an unusually coherent week of shows in Milan.  That seems to have carried over into the haute couture presentations for spring 2013 that were also all over the fashion map, from Jean Paul Gaultier’s crazy Bollywood train wreck to the lovely but strictly regimented Valentino show in the same Parisian mansion they always use.  Just one of the many gowns they sent down that labyrinthine path required 2,500 hours of embroidery so, hey, I guess I’d want to control things pretty closely, too. In all the madness, a theme of the spring garden could be detected in the couture shows this season and the two collections that had everyone talking, Chanel and Christian Dior, both used flowers as inspiration.  Other than that, they couldn’t have been more different.

I am definitely not a die-hard Chanel fan.  I usually dislike the main Spring/Summer and Fall/Winter collections pretty intensely, but I find that something more enchanting about the Resort and Metiers d’Arts collections presented in the interims.  This couture offering was also pretty impressive, though it didn’t hurt that Herr Lagerfeld had created for the show a spectacular neoclassical forest under the glass dome of the Grand Palais in the middle of Paris.  The collection began with ivory tweed suits that you’d expect to see from Chanel but it slowly morphed into something fantastic with lace, feathers, gauzy layers and intricate beaded appliqués of many varieties of flowers.  The palette was mostly in black, white and navy, evoking the famous Ascot scene in My Fair Lady.  Some of the gowns were a bit much and there were several looks that I could imagine Helena Bonham-Carter wearing in a heartbeat, which is never a good thing.  The general feeling of lavish fantasy overtook the silliness, though, even if I kept thinking that those Belle Époque silhouettes were what Coco Chanel herself rebelled against in creating her clean aesthetic. Ms. Chanel might, in fact, have personally preferred Raf Simons’ second haute couture outing for Christian Dior, even if I didn’t.  This show was also presented in a garden setting, though this one was more austere with cleanly clipped shrubbery on a white pathway.  Flowers again ruled the runway in tiny blossoms stuck onto bustiers and gloves and gowns in unexpected ways and layering played a big part with tops over corsets over pants or a bolero over a layered cocktail dress.  There were a couple of standouts like a white strapless gown with black slashes and an acid-yellow fitted dress but I was mostly struck by the harshness and occasional awkwardness of the ensembles.  The bright makeup and pixie cuts on the models unfortunately did nothing to alleviate this.  I applaud Simons for following his modernist vision by continuing the minimalist reinvention of classic Dior shapes and, all in all, the reception was largely positive, but it left me feeling a little sad.