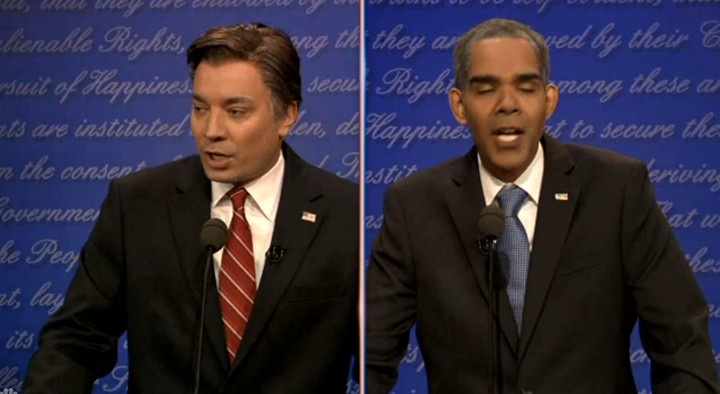 The general consensus around here is that while Romney may have technically won the first debate, he ultimately lost it.  To paraphrase Michelle Obama, the campaign for president reveals who you are, and there is no doubt about it: Romney is a dyed-in-the-wool bully, or he can’t stop seeming like one.  Jim Lehrer might not be as beloved by the nation as Walter Cronkite, but he’s still a weakening old man who has done his bit to bring the news within a reasonably intelligent format for his entire career, and presumably for a lot less money than his peers over at the networks.

But Big Bird?  We’re talking about an icon that has been firmly imprinted in almost every American child’s mind since he first understood that the glowing screen in the nursery provided amusement, without fully understanding that he was being educated at the same time.  Big Bird draws out a primal, visceral affection from most Americans, except people like Romney and the people who like him.  It is that rare thing called ‘unconditional love’ that some couples manage to forge over time, but most kids have for their parents at the end of the day, regardless of childhood resentments. (More after the jump.) As Eric Baker said a few weeks ago, we Americans don’t like mean people.  Threatening to kill Big Bird was a huge misstep, probably bigger than the 47% slip up two weeks ago.  Indeed, it appears the PBS-bashing segment was the most watched portion of the entire debate, and the memes that spread around the internet afterwards were pretty savage.  And those little viral things are so much more powerful than the debates, because they are the true vox populi, and they are going to end up a lethal case of pneumonia for Romney’s campaign.

The funniest reaction to the debates came from Jimmy Fallon and his team.  Without hitting it too hard on the nose, Fallon really underscores the noisome bully Romney has always been: