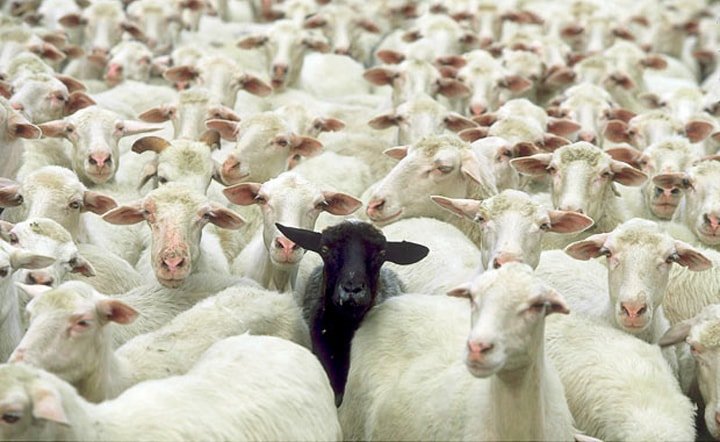 But all in all they are simply “normal” people.  In that respect, they have been successful.  I was particularly struck by their normalness and how seemingly content they are with it when my sister-in-law, a relative newcomer to the family, sent me an exhaustive Shutterfly album containing pictures of everyone in my family at various occasions over the summer.  Her photos were an outsider’s subjective perspective on the Killoughs, albeit one heavily filtered with emotional attachment.  The word that came to mind as I flicked through the album was “happy.”  That white-sheep portion of the family is somehow now happy.  I would never have imagined that when we were kids.

I emphatically am not normal, never have been, but that is only partly to do with my family making me an outcast, and they have, but only partly.  I think I suit the role, wear the black sheepskin well and proudly.  Nearing fifty, I am still very much a manchild.  Further self-examination through link skipping reveals that at this stage I’m unlikely ever to be a “responsible adult,” much to my relief.  At best, I am turning into a tall Bruce Willis playing the Baron Munchausen, a weathered, eccentric ranconteur.  I am as happy with this state of affairs as my family is with themselves as they appear in my sister-in-law’s photos, splashing in various pools and lakes, beaming over lunches on porches, picnic tables, mountain trails.

As I write this, I am returning home for Thanksgiving, on a Virgin America flight to New York from L.A., somewhere mercifully high over a state that probably voted for Romney, a place I am unlikely ever to go to; that state’s brand of normalcy is locked in a bitter, dysfunctional struggle with mine.

For a combination of reasons that arose equally from circumstance and attitude—the kind of combination of reasons that is best left between a purportedly dysfunctional-yet-happy family and their pet black sheep—I haven’t been home for two and a half years.  The last time I was gone so long was when I was on some youthful Munchausen-esque extended expedition in India, making films and consuming as many assorted derivatives of the opium poppy as I could.

So now you understand why I’ve been contemplating dysfunctionality lately.  Not just everyone else’s but mine as well.  I’ve taken lots of tests online, but it turns out I’m the opposite of dysfunctional—I scored so high on a resiliency test that I swear my browser went “Wow!”  And, despite the above sentence about opioids, and my admitted taste for all manner of intoxicants from time to time, I don’t make a very good addict.  So as far as I’m concerned—and I’ve got the personality tests to prove it (God, I love those things)—I am one of the most functional people I know.

Why has my family seen it so differently?  Most importantly, there is the chronic shortage of funds.  But I’m an artist, much as I hate to use that word—I feel that is a label reserved for painters.  Personal semantics aside, the fact that I have chosen to intermittently forego for extended periods of time the substantial perks of the social-cultural background I was born into has been one of the greatest sacrifices I have made.  I say “intermittently” because just as often as I’ve landed flat on my ass, I have managed very well.  “I don’t know how you do it,” my mother said in wonder a few years ago, pre-Recession.  It was not an approving comment, but in fairness to her, the dynamics of the entertainment business are a mystery to civilians, understandably so, and a nerve-wracking one.

From the standpoint of American values and measures of success, my family is perfectly correct: In economic terms, I was born upper middle class but managed, through my stubborn, uncompromising attitude toward my work, to plummet to lower middle class (emphasis on lower), whereas my siblings have maintained their status.  I completely understand how they see it, that it causes them anxiety when they think about my lot, but the reality is I smiled as I wrote the sentence before this one.  Take that as you will.

I just did the inevitable, something I’ve been putting off for months: On the in-flight entertainment system, I watched Wes Anderson’s Moonrise Kingdom.  I don’t understand Wes Anderson, why he continues to direct anything other than animated features, like Fantastic Mr. Fox, which I liked because animation is a format that suits his particular style of narrative.  I am immensely irritated by his tongue-in-cheek, tableau style of contrived master shots, by that unnatural, deadpan presentational acting, by the snarky-quirky, not-very-intelligent, certainly-not-insightful dialogue.  His films are about nothing.  Simply nothing.  I still have no idea why I sat through Darjeeling Express, what I was looking at.  All I remember is the Vuitton Luggage.  And the master shots and excruciating presentational acting and rubbish dialogue about nothing. The kids from Moonrise Kingdom try to emote, against direction.

Moonrise Kingdom is as atrociously stilted and unrelatable as all Wes Anderson films.  The only reason it’s more successful than his previous outings is it has higher-profile actors than usual, it’s less self-consciously weird in terms of narrative than his other live-action fare, and it’s basically a middle-grade children’s story.  (Note: I did like Anderson’s first film, Rushmore.  Somewhat.  Wasn’t crazy about it, though.)

Most germane to this post is that Moonrise Kingdom is about two pubescent black sheep who fall in love and run away, but eventually reach a compromise with the “normal” world around them, a world epitomized by the highly structured, martinet Boy Scout troupes from which the orphan male black sheep escapes.  Interestingly, like me, the boy is highly functional and adept at the many varied tasks that identify him as a scout.  “That was the finest pitched encampment I’ve ever seen,” Edward Norton’s scout-leader character remarks of the boy’s hideaway in the wilderness.

Eventually, the black-sheep lovers return to their respective flocks and compromises are made.   Anderson closes with the point he makes in the beginning: that, despite sounding so different from each other, all instruments in an orchestra can all play the same tune.  And when they play together, the result is spectacular and moving.  It’s a dumb point, trite, and this gibberish should never have been made, but given the fact that I watched it while taking a break from writing an article about being a black sheep vested the film with an accidental symbolic importance.

Of all holidays, Thanksgiving is the one I appreciate the most, and I’m perversely proud that Canadians and Americans are the only two nations to celebrate a day devoted to gratitude.  It’s not easy being a willing outcast, who re-dyes his wool black with devoted regularity, but it’s no harder than anyone else’s life.  Very often the only way to get through the tough times is to count one’s gratitudes, meditate on them one by one in a mental rosary.  No matter how dark it gets, no matter how seemingly steep that climb, what powers me up that relentless hill is to remember all I should be thankful for.  God and religion have nothing to do with it—saying grace at the beginning of the Thanksgiving meal is as much a part of the process as marshmallows atop sweet potatoes.  Thanksgiving is really about dispelling the clouds by letting in the brightness of gratitude.

As I head back to my family, as I am asked to put away my computer as we prepare to land in my New York, my proud and battered native city, I imagine the reunion after my two and a half years away.  I wonder which of my two nieces I shall embrace first, how much taller they will be now.  Apparently they have counted down the days and the hours for Uncle James’ return.  I look forward to seeing my buddy Beau, their goofy, gorgeous Lab, whom I used to take for long walks up the Hudson River.  And, yes, to seeing the rest of my family again, the awkwardness no doubt dispelled within a few moments by the familiarity of family.

As we bank to the left, I see the partly completed Freedom Tower trying to assert itself against the twinkling, established skyline.  This is new, this is change, this is renewal. And the gratitudes storm in rudely and surprisingly and cloud my vision with a tearful sentimentality that shreds my black sheep Munchausen cool.

Happy Thanksgiving, y’all, from me and my girls,