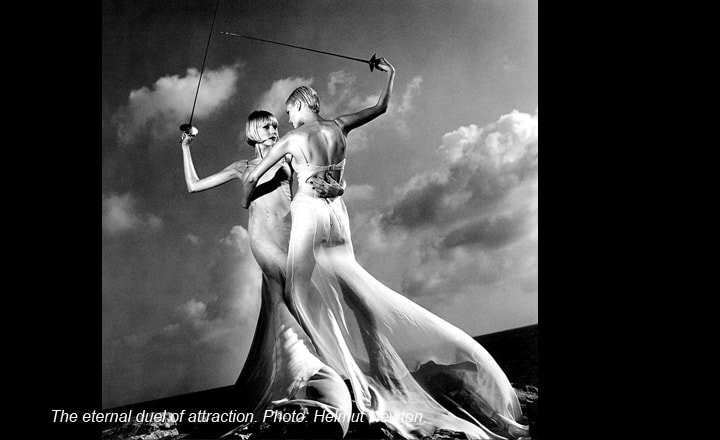 Is it love? More importantly: is it any good?  Or have you merely been seduced?

An interesting discussion erupted today on a Facebook post by the British artist Matthew Stradling.  He put up a recent picture of David Bowie with the comment “We can’t be beautiful forever.”  To which I replied, “Looking more like Paul McCartney every day. But let’s face it, Bowie was never beautiful.”
Of course, this prompted something of an uproar from people our age, who remember Bowie as the epitome of male pulchritude.  “Oh, c’mon,” I responded in a subsequent comment.  “He was interesting looking at best, way too thin. He was seductive, as was his singing. We were all hypnotized into thinking he was sex on wheels. I feel like the little girl in The Emperor’s New Clothes. But the fact he was joli laid, as the French say, doesn’t take away from the genius of his early music.”
The original poster, Matthew, is someone I would consider a victim of seduction.  As a brilliant figurative artist, someone who can faithfully reproduce the human form in oil painting and then layer his own vision on top of it, he would have been a superstar artist had he lived a hundred and fifty years ago, before we became seduced into buying invisible clothes by clever faux tailors and their promoters, who duped us into believing that sequences of colored dots and skulls encrusted with diamonds were infinitely more valuable and artistic.

I don’t give a damn if I seem fuddy-duddy with my opinions on contemporary “art” because I’m not.  I think the dots and twinkling skulls are quite amusing.  But it isn’t fine art.  What Matthew does is fine art, requiring a unique skill that most of us could never hope to master in our lifetime.  It’s just that as a wordsmith I would rather what Damien Hirst does be called what it really is: Gimmickry.

Bowie’s seductiveness is legendary.  I’ve never met him personally, but I have had a few encounters via third parties.  Once was over the purchase of an deceased artist’s entire collection that a friend was selling, which I handled for a brief moment until the sale was closed.  The second time was consoling another friend, who did the cover art for one of his albums.
This artist was British, too, a figurative painter like Matthew Stradling, trained at all the right academies, but most of all straight, not someone who had any romantic or sexual inclinations towards Bowie.  Still, it’s fair to say he fell in love with Bowie while they were working together.  They partied and hung out together continuously for months, but once the album was complete and in the stores, Bowie dumped him from one day to the next.  Never said another word, never returned a phone call.  Apparently he does this, or did back in his heyday.

My friend was seriously fucked up over this, and delved even deeper into his heroin addiction, much as any jilted lover would do.  It’s hard to accept the fact you’ve outlived your usefulness to someone, that a relationship you so relished, which you assumed would be eternal, has simply run its course and dried up.
I’ve been seduced by a few evil people in my life.  They weren’t deliberately evil, just inherently so; I’m not sure they could help themselves.  I imagine Bowie is the same way, and being who he is, he can just walk away without explanation or remorse faster than others can.  The walls surrounding him are that much harder to breach, the moats that much deeper.
As a not-very-good love addict, I’ve been guilty of switching off, too.  I have gone to embarrassing lengths not so much to seduce a lover as to woo him, lavishing attention, affection, gifts beyond my means.  Then I’ve turned on a dime, woken up one day as if after a drunken binge, wondering what was on my mind, hungover and filled with regret.  Sometimes, but not always, I’ve even wondered what I ever saw in him, and shuddered.  I’m thankful that at least I’m always communicative and responsive to the former object of my feral affections, which when they are active are not so much undying as they are as undead as unstoppable zombies, but that polite responsiveness is probably due in large part to the rigidly formal etiquette of my upper-middle-class upbringing.

I take comfort that I’m not alone in this wake-up change of heart.  Hitler seduced the most reasonable, logical, practical culture in the world into doing such unspeakable deeds that some Iranians and not a few crackpots in America think they are fiction.  I could never understand George W. Bush the first time he was elected, but the second time around, by which time I was living in self-imposed exile in London, I could only attribute his staying power as some form of seduction that I just couldn’t grasp.  My reaction to him was such instictive revulsion that I think I have listened to maybe ten minutes cumulatively of him speaking in my life, that’s how fast have I changed the channel if I have seen him on TV.  Just like me after falling out of love, I am sure many people who voted for him woke up to wonder what they ever saw in him.
According to the kind of religious folk who voted for Bush, seduction is the Devil’s secret weapon.  Bowie has certainly lost the power of his.  If I were he, I would either stop public appearances altogether or grow a beard to cut the melting-candle look in half.  He certainly can’t seduce us into appreciating the dreadful fine art he creates.  In that respect, he could do worse than start collecting Matthew Stradling, whose paintings are only getting better with age.