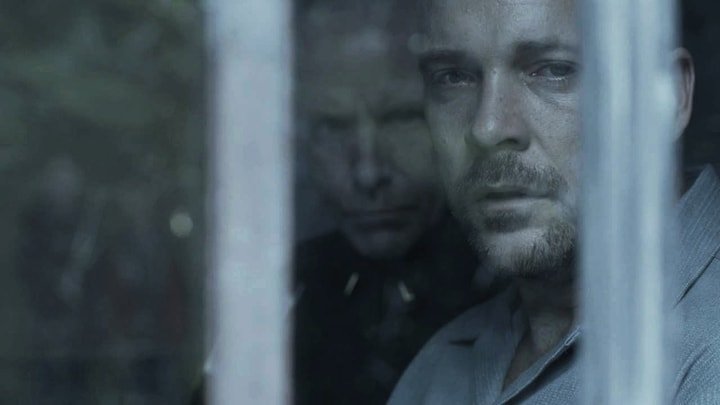 Little did we know that we were in for a double whammy on the death penalty issue within a week. Those of us who also follow AMC’s The Killing were hoping against hope that Peter Sarsgaard’s character, Ray Seward, would get a last-minute reprieve — surely the rainy state of Washington would see there was more than reasonable doubt. I guess we should say SPOILER ALERT just about now, but, trust us, Seward’s hanging was one of those moments in filmed entertainment both large screen and small that ranks among the most wrenching in the history of the medium; in other words, it doesn’t matter that you know what’s going to happen, it’s the way it’s executed (oops, bad pun) that catapults this to instant classic.

Seriously,  we were scouting for an online support forum after seeing this. Season 3, Episode 10. Remember it:

We just can’t get enough of megastar architect Zaha Hadid. Or maybe it’s her career that is so dazzling and inspiring. Check out her $22-billion subway system in Riyadh, Saudi Arabia. It’s so chic we don’t even mind that it’s in that even more inhumane country… Okay, maybe we do, a lot. They don’t deserve Zaha. Why? Because if she were a citizen she couldn’t vote or drive, and she’d have to wear a veil and generally be a victim to the many other local crimes against women. But, ya know, $22 billion and the opportunity to go all Dune on it… you’re forgiven, Zaha. The final episode of The Killing is on Sunday. We have a short break before AMC apparently kills it again with the final eight episodes of Breaking Bad, premiering on August 11. You know it’s going to be out there because this has to be the most ominous, evocative promo for a TV drama, ever:

Chanel can’t be serious about making surf boards. These have to be store display decorations. Still, we had visions of Kaiser Karl totally amped in a wetsuit doing a cheater 5 off Malibu. And, well, we giggled. First Sean Parker gets the Justin Timberlake treatment in The Social Network. Now he’s treated himself to what Vanity Fair is touting as “the wedding of the year?” That’s their question mark, not ours. The nuptials were held in Big Sur among the big trees, and we didn’t need to read the text to realize this was inspired by Lord of the Rings. Once a geek… We don’t agree with the snarkarati around the web — all weddings tend to be a bit “cheesy,” and we think this one happens to look lovely and appropriately fantastical. Apparently the location alone cost $4.5 million. We’re bedazzled. The scribblers among us were snickering in recognition over this: Our friends over at Peccadillo Pictures in London — a tasteful bunch who distribute and promote quality festival films you might not see otherwise — alerted us to Martian New Years, which occurred on Wednesday, perhaps coinciding with Sean Parker’s wedding. It’s the 32nd anniversary since the founding of the Martian calendar, which we have to admit we had no clue about, but if there’s a lunar, why not a Martian? We welcome any excuse to pop a bottle of champagne, and to revisit one of our favorite cartoon characters, Marvin the Martian from Bugs Bunny: One of our favorite feeds to follow these days is photographer Nick Knight’s SHOWStudio, a website dedicated to fashion film. The enviably inventive Knight created a series of images inspired by Roy Lichtenstein featuring model Lindsey Wixon as a scorned Pop princess. The text in the bubbles is by Perez Hilton. What can we say: just genius. More HERE.